From biofuels and other commodity chemicals to methane production, genomic study peers into the mysteries of a goat’s gut 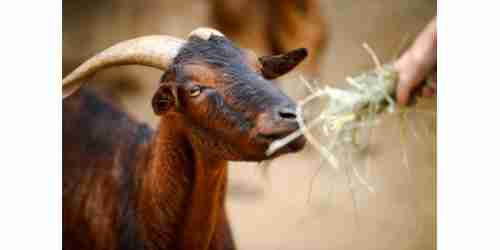 “This has been the longest single effort in my lab,” said O’Malley, who with her research team way back in 2015 first embarked on an ambitious project to characterize gut microbes in large herbivores. In a paper in the journal Nature Microbiology, she and her team report the results of more than 400 parallel anaerobic enrichment experiments, which include more than 700 previously unknown microbial genomes and thousands of new enzymes, as well as a possible mechanism for much of the methane often blamed on cows and goats. Of particular interest to the researchers were the non-bacteria denizens of the goat gut microbiome — “minor players” like anaerobic fungi that constitute a tiny fraction of the bacteria-dominated population.

Over roughly 400 parallel enrichment experiments on fecal matter contributed by Elway, a San Clemente Island Goat named who lives at the Santa Barbara Zoo, the researchers teased out populations of biomass-degrading microbes with different biomass substrates. They further sculpted some of these populations using antibiotics to inhibit the growth of bacteria, leaving rarer microbes such as fungi and methanogens (single-celled organisms from the domain Archaea) to dominate. In the process, the team uncovered more than 700 novel microbial genomes “unique at the species level,” according to the study. Also present were rare fungi they had previously isolated from large herbivores.

For their small population, fungi, it turns out, play a disproportionately large role in biomass degradation. “They produce the lion’s share of the biomass degrading enzymes that the community relies on to function,” O’Malley noted. Additionally, according to the paper, fungi have other strategies, such the ability to physically penetrate plant cell walls, exposing surfaces for these enzymes to act on.

These and other insights from the research take us closer to developing technologies using microbes to create industrially important chemicals from cellulose, the most abundant organic compound on the planet. O’Malley and her group are focused on understanding the roles of and interactions between members of these complex ruminal communities, and they’re looking to a future where designed microbial communities can create value-added chemicals. “Can we build a bio-reactor that houses not just one type of microbe, but a few, or dozens? Can we do really complex chemistry the way nature does? That’s kind of the ultimate goal here,” O’Malley said.