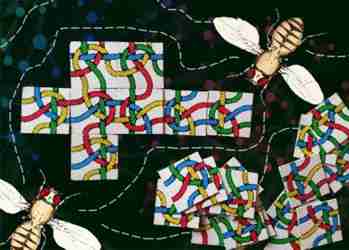 The Fly Facility at the Bangalore Life Science Cluster is a unique facility that offers numerous services to Drosophila researchers. A large part of these services includes engineering the genome of the flies using specific intracellular molecular tools, such as endonucleases and integrases. One of the tools the facility specialises in is CRISPR-Cas9. In a recent paper published in eLife, the facility, in collaboration with the lab of Prof Raghu Padinjat, generated a CRISPR-based tool kit for 103 genes. These genes were chosen on the basis of their roles, either known or speculated, in a specific intracellular signaling pathway, phosphoinositide (PI) signalling.

CRISPR tools generated in the Fly Facility which target the PI signalling pathway allow for the manipulation of genes in specific tissues and developmental stages of choice. To show the usefulness of the toolkit, the team deleted all the 103 genes individually in Drosophila eyes and observed that many of these mutations cause defects in eye development. “Since it is a key element of controlling the organization of animal cells, PI signaling is involved in various seemingly unrelated diseases, including cancer, diabetes, and neurological disorders. The fruit fly is a great model for scientists to perform genetic screens, because of its compact genome. For most proteins there is one gene in flies, unlike humans that have multiple genes for the same function,” says Prof Padinjat. Dr Trivedi says, “Although the Drosophila system is simpler, PI signaling is complex. Since PI signaling is important for a large number of cellular processes, and each type of PI molecule controls multiple processes, this tool kit will help untangle the specific downstream signaling events”.

The PI signalling tool kit generated at the Fly Facility equipped the facility with the knowledge and technical expertise for not only large-scale CRISPR related molecular biology and genetics work, but also in genetic screening based on eye and wing phenotypes.