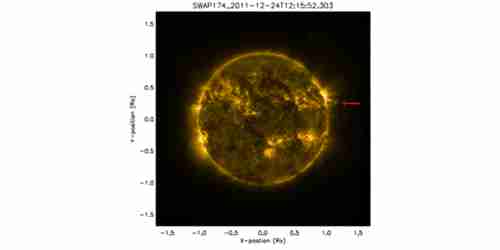 Solar corona observed in EUV image of SWAP instrument. An erupting structure at the west limb is pointed at by the red arrow

Scientists have developed a new technique to track the huge bubbles of gas threaded with magnetic field lines that are ejected from the Sun, disrupting space weather and causing geomagnetic storms, satellite failures, and power outages. As the ejections from the Sun, technically called Coronal Mass Ejections (CMEs), cause various disturbances of the space environment, forecasting their arrival time is very important. Software named Computer Aided CME Tracking Software (CACTus) based on a computer vision algorithm was so far used to detect and characterise such eruptions automatically in the outer corona where these eruptions cease to show accelerations and propagate with a nearly constant speed. However, this algorithm could not be applied to the inner corona observations due to the vast acceleration experienced by these eruptions. This severely limited the capability to track the eruptions as CMEs accelerate in the lower corona. Moreover, with the advancement in space technology, there has been a tremendous increase in the amount of data obtained from spacecraft. To identify and track the solar eruptions in huge number of images can become tedious if done manually.

Research led by Mr. Ritesh Patel, Dr. Vaibhav Pant, and Prof. Dipankar Banerjee from Aryabhatta Research Institute of observational sciences (ARIES), Nainital, an autonomous institute under DST, Government of India, along with their collaborators from Royal Observatory of Belgium, have led to the development of an algorithm, CMEs Identification in Inner Solar Corona (CIISCO) to detect and track the accelerating solar eruption in the lower corona. CIISCO has been successfully tested on several eruptions observed by space observatories, including Solar Dynamics Observatory and Solar-Terrestrial Relations Observatory, PROBA2/SWAP launched by NASA and ESA, respectively. The research was published in the Solar Physics journal. The parameters determined by CIISCO are useful to characterise these eruptions in the lower corona, a region where the properties of such eruptions are less known. An implementation of CIISCO on the large volume of data available from space observatories mentioned above will be helpful to improve our understanding of eruptions in the inner corona. As India’s first solar mission, Aditya-L1, will be observing this region of the solar corona, implementation of CIISCO on the Aditya-L1 data will provide new insight into the CME properties in this less explored region.