The Human Blood Groups- Complexities on a simple cell 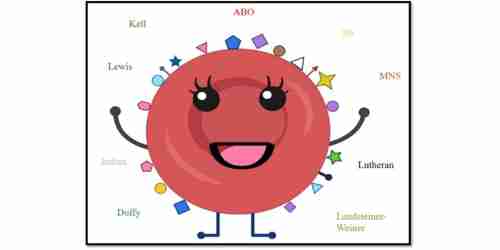 Antigens are proteins or polysaccharide entities which have varied functions and have the ability to initiate and immune response in individuals. Depending upon their origin, they are divided into two types: Foreign and Self, and depending upon their nature, they are broadly classified into three types: (i) Soluble Antigens - which are dissolved in fluids such as blood, (ii) Intracellular Antigens- which are found inside the cells and (iii)Surface Antigens- which as the name suggests, are found on the surface of cells or embedded in the transmembrane. Human Blood Group Antigens are the most commonly known surface antigens found on the red blood cells which are devoid of a nucleus and therefore the simplest of the cell types. These antigens are known to confer blood types to the individuals depending upon their presence or absence on the red cell surface. The human blood group systems comprise of the blood group antigens and the genes which encode these antigens. The ABO blood group is the most widely known blood group system, followed by the Rh blood group system. Apart from these two several blood groups have been identified and characterized and their genes have been sequenced. Although not of the quantum physics level, but the human blood group systems are fairly complex in their own way. This complexity arises mostly due to the antigens comprising the blood group systems. Imagine the red blood cell as our planet earth, the countries represent the blood groups and the individuals in a population represent the antigens of the blood group system, i.e. the representative population of that particular country. Let us assume that a new country has been found by some new age Columbus who came across an ethnic group which was never known before. The people present there speak a language you’ve never known of, they have their own religion, occupation and way of life. However, directly or indirectly they do contribute to the functioning of the earth, don’t they? This is how the relationship between the antigens and the blood groups are identified and either new blood groups come into the picture, or older blood groups are assigned to pre-existing blood group systems. Seems pretty simple so far! Now think of it this way. You ask one or a few individuals from each country to stand on a platform. Some of them will show up and some won’t due to a lot of factors, but you would still have a diversified lot of people on that platform. This correctly represents the scenario on cells, represented by the platform and the individuals by the antigens. Some antigens get expressed on the cell surface and some don’t, depending upon the inheritance and expression of the genes encoding them. But still, there is a diverse population of antigens which is found on the surface of the cells belonging to different blood group systems. This means that at once, a person can be positive for more than one blood types at once. To add to this complexity, some blood groups have more than one antigen in their system. For instance, the Rh blood group system is known to have around 55 different antigens in the blood group system! Almost all the blood group antigens either have diversified roles to play in maintaining the normal homeostasis of the body or have implications in various diseases.  With the advent of more advanced techniques, more studies are being carried out on a molecular level. This has resulted in the identification and characterization of newer blood groups and the allocation of antigens to existing blood group systems which are identified on the red cell membrane. These studies also pave the way for understanding the roles of the human blood groups in different conditions making them not only complexities on a simple cell, but so much more.