The glue that holds cells (and us) together 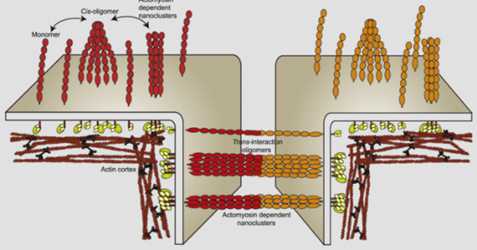 Investigating how the glue that bind cells assembles was the focus of a collaborative project of the Mayor Lab at the National Centre for Biological Sciences, and the Lecuit Lab at the Turing Centre for Living Systems (CenTuri), France. The results were recently published in Current Biology. The team examined the organization and structure of Cadherins, which are a type of adhesion protein concentrated at cell-cell junctions, and necessary for the formation of tissues. In the case of epithelial tissues, they are named E-cadherins, and specifically “dE-cad” refers to the E-cadherins in fruit fly (Drosophila melanogaster) epithelial cells. Cadherins are not naturally present in the Drosophila larval blood cells, so this primary cell system provided a good model system to test the role of dE-cad in cell-cell adhesion and organization. By creating their own cell-cell interaction system in the Drosophila larvae, the researchers were able to gain insights into how these adhesive proteins work. The E-cadherin system could be studied from a new perspective by this synthetic approach that is still set within the organism, using biophysical tools developed for the purpose in the Mayor Lab.

The Lecuit Lab provided and created new fly lines used in the experiments conducted at NCBS. They expressed dE-cad in the larval hemocytes, single cell systems that move around in the insect hemolymph, similarly to the immune cells in human blood. The dE-cad expression in the hemocytes was achieved through a powerful tool called the UAS-GAL4 system. They found that the organization of the cadherin protein in hemocytes mimics that of the epithelium of Drosophila embryos. With the convenience of fruit fly biology, various aspects of the cadherin system could thus be probed by utilizing specialized techniques such as FRAP (Fluorescence recovery after photobleaching), FCS (Fluorescence correlation spectroscopy) and Homo-FRET microscopy.

They found that cadherins can interact with molecules on the same cell membrane (cis interaction) as well as with molecules on the opposing membrane (trans interaction). They found that extra-junctional dE-cad are organized as immobile nanoclusters and loosely packed diffusive oligomers in hemocytes. Cis interactions of the extracellular domain of dE-cad help in generating immobile oligomers, which promotes the formation of actomyosin sensitive nanoclusters of extra-junctional dE-cad. The junctional dE-cad also exhibits trans paired nanoscale organization. “The observations suggest a hierarchical assembly mechanism for the generation of the actomyosin based nanoclusters,” says Ruma Chandran, the first author.