Research on one species, the apple fly, suggests this evolution might not take as long as we would expect 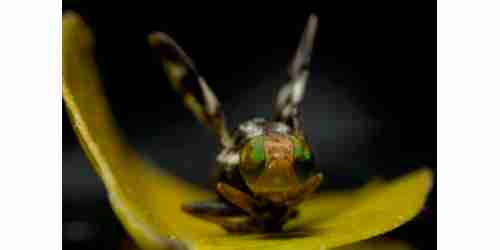 Continuing the 160-year-old inquiry into the origins of the apple fly, a team of scientists from around the world have just published their research in the Proceedings of the Royal Society B. The researchers span three continents, from the National Centre for Biological Sciences, the University of Trans-Disciplinary Health Sciences and Technology, University of Notre Dame, Free University Berlin, and Max Planck Institute for Chemical Ecology. They have been probing the neurological processes which underlie important behavioural changes in the apple fly: preference toward a new host plant and mate choice. These behavioural changes contributed to a rapid shift from hawthorn flies into a derived race of apple-infesting flies.

Hawthorn flies and apple flies are specialist insects, they feed only on particular fruit, either the hawthorn berries or ripe apples. They also mate on or near the fruit, and lay their eggs within it. What is interesting about the apple and hawthorn flies is that each generation emerges with a specific preference for the odor of ripe fruit that they use to locate their host, and a strong aversion to the odor of the other fruit. What makes these two races of flies distinct?

Using recordings of electrical activity and imaging the brains of the flies, the team identified that both apple and hawthorn flies use the same brain regions to process odors, but switch the locations of processing. In other words, where apple flies process the main apple odor (butyl hexanoate) is the same location in the brain where hawthorn flies process the major hawthorn odor (3-methyl-1-butanol), and vice versa. Thus, the locations for preference and aversion to fruit odors stay the same, while the odors that are processed there are inverted. It is possible that a simple shift in the processing of important sensory information might be a major contributor to the diverse species we see. Through the change in the neurological processing of the fruit odor, a change at a species scale can be triggered. Such a subtle shift in the processing of important sensory information in the brain could be contributing to the change in behavior that helps drive their evolution into new species.