Cell lines are extensively used in basic biomedical research to study the various aspects of pathology, physiology, patho-physiology of disease, morphology, drug effects and the differentiation of cells. 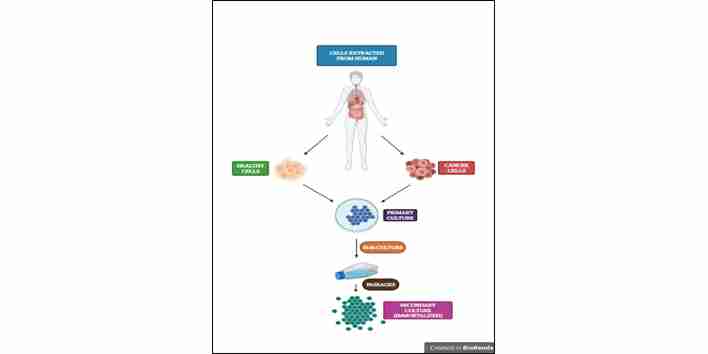 Cell lines are a subpopulation of cells which possess a stable phenotype that can be maintained over time. These cell lines are also capable of sustained proliferation in culture conditions. Cell lines have the ability to generate a clonal population of cells. Cell lines are extensively used in basic biomedical research to study the various aspects of pathology, physiology, patho-physiology of disease, morphology, drug effects and the differentiation of cells. The importance of cell lines has been well established in the field of cancer genetics and molecular biology for quantifying the effects of target drugs on pathways. The choice of a cell line depends on aspects such as the target organism, disease to be investigated and organ or tissue system to be studied. Cell lines are attractive models for research as they ensure population homogeneity of cells and are also easy to culture and maintain. These cell lines are continuously subcultured through an acceptable number of passages to provide a large number of cells in a relatively short period of time. They serve as ideal models for high throughput drug screening.

Primary cell lines are derived from the tissues of animals and are utilized in biomedical research. Passaging these cell lines paves the way for establishment of a secondary cell line. But not all primary cell lines can generate stable secondary cell lines. The potential to become a successful secondary cell line depends upon its proliferative power. Indefinite cell lines are those cell lines that are derived from transformed cancerous cells in vitro which can further be grown into monolayers or as suspensions. These lines are simple to manipulate and maintain. These cells tend to have rapid generation times, which may be as low as 12-14 hours and also possess the potential of being subcultured indefinitely. Cancer cell lines serve as a milestone in-vitro research to analyze cancer genetics and to evaluate the pharmacological profile of anticancer drugs. It allows investigation of tumor pathophysiology in a controlled and simplified environment. The benefits of using cancer cell lines include cost sustainability and requires less maintenance compared to animal models. They are readily available which paves a way for rapid implementation of research.

Use of such models allows gathering of information about various signalling pathways and deregulated genes in cancer. This assists in better understanding of the poorly elucidated pathways encountered in cancer. In- vitro cancer models play a crucial role in understanding processes like genetic and epigenetic regulation, cancer progression, apoptosis, identify potential markers and to investigate cancer therapeutics. Cancer cell lines also depict a high level of homogeneity which eases analysis of tumor microenvironment. During the initial passages, they are highly similar to primary tumors. These cell lines are immortalized and stored allowing a wide accessibility.