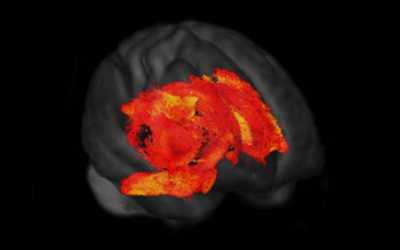 Lead author Dr Angeliki Zarkali (Dementia Research Centre, UCL Queen Square Institute of Neurology) said: “We have found that people with Parkinson’s disease who have visual problems are more likely to get dementia, and that appears to be explained by underlying changes to their brain wiring. Dementia is a common, debilitating aspect of Parkinson’s disease, estimated to affect roughly 50% of people within 10 years of a Parkinson’s diagnosis.

The researchers identified white matter damage to some of the long-distance wiring connecting the front and back of the brain, which helps the brain to function as a cohesive whole network.

The Communications Biology study involved 88 people with Parkinson’s disease (33 of whom had visual dysfunction and were thus judged to have a high risk of dementia) and 30 healthy adults as a control group, whose brains were imaged using MRI scans.

The research team also found changes to the levels of some neurotransmitters (chemical messengers) in people at risk of cognitive decline, suggesting that receptors for those transmitters may be potential targets for new drug treatments for Parkinson’s dementia. Notably, while dopamine is known to be implicated in Parkinson’s, the researchers found that other neurotransmitters – acetylcholine, serotonin and noradrenaline – were particularly affected in people at risk of cognitive decline.