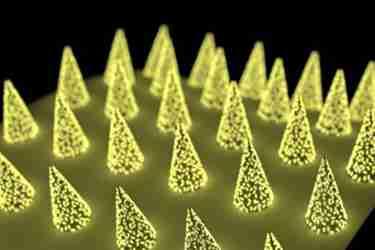 Engineers at the McKelvey School of Engineering at Washington University in St. Louis have developed a microneedle patch that can be applied to the skin, capture a biomarker of interest and, thanks to its unprecedented sensitivity, allow clinicians to detect its presence. The technology is low cost, easy for clinicians or patients themselves to use. The research, from the lab of Srikanth Singamaneni in the Department of Mechanical Engineering & Material Sciences, was published in the journal Nature Biomedical Engineering. In addition to the low cost and ease of use, these microneedle patches are nearly pain-free.

Finding a biomarker using these microneedle patches is similar to blood testing. But instead of using a solution to find and quantify the biomarker in blood, the microneedles directly capture it from the liquid that surrounds our cells in skin, which is called dermal interstitial fluid (ISF). Once the biomarkers have been captured, they’re detected in the same way — using fluorescence to indicate their presence and quantity.

ISF is a rich source of biomolecules, densely packed with everything from neurotransmitters to cellular waste. However, to analyze biomarkers in ISF, conventional method generally requires extraction of ISF from skin. This method is difficult and usually the amount of ISF that can be obtained is not sufficient for analysis. That has been a major hurdle for developing microneedle-based biosensing technology. Another method involves direct capture of the biomarker in ISF without having to extract ISF. Like showing up to a packed concert and trying to make your way up front, the biomarker has to maneuver through a crowded, dynamic soup of ISF before reaching the microneedle in the skin tissue. Under such conditions, being able to capture enough of the biomarker to see using the traditional assay isn’t easy.

But the team has a secret weapon of sorts: “plasmonic-fluors,” an ultrabright fluorescence nanolabel. Compared with traditional fluorescent labels, when an assay was done on a microneedle patch using plasmonic-fluor, the signal of target protein biomarkers shined about 1,400 times as bright and became detectable even when present at low concentrations. That’s far beyond the real-world physiological range. But using plasmonic-fluor, the research team was able to detect biomarkers on the order of picograms per milliliter. These patches have a host of qualities that can make a real impact on medicine, patient care and research.