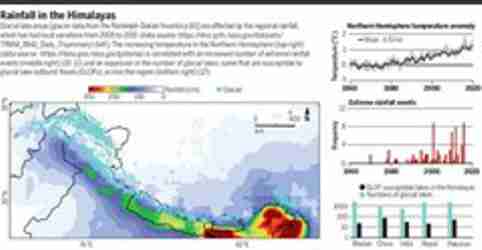 Satellite-based real-time monitoring of Himalayan glacial catchments would improve understanding of flood risk in the region and help inform an early flood warning system that could help curb disaster and save human lives, says a recent study. This should be the future strategy to reduce loss of human lives during glacial lake outburst floods (GLOF), said a study carried out by scientists from IIT Kanpur. The study carried out by Dr. Tanuj Shukla and Prof. Indra Sekhar Sen, Associate Professor from IIT Kanpur, with support from the Department of Science & Technology, Government of India, has been published in the international journal ‘Science’. Temperature and the numbers of extreme rainfall events are rising at an increased rate because of climate change. Suitably called Earth's “Third Pole”, the Himalayan region is home to the largest ice mass outside of the planet's Polar Regions. The glaciers in the Himalayas are melting at a faster rate creating new lakes and expanding the existing ones. Besides, the rising temperatures and extreme precipitation events make the region increasingly prone to a variety of natural hazards, including devastating glacial lake outburst floods (GLOFs).

In their recent work, the Scientists also point out that the surge of meltwater in mountain streams is most commonly caused by cloud-burst events during the monsoon season (June–July–August) time frame. However, the recent (7 February 2021) sudden surge of meltwater in the river tributary of the Ganga, Dhauli Ganga, during the dry season suggests that this time frame needs to be expanded. The catastrophe in the upper Dhauli Ganga basin is linked to processes other than precipitation events, such as snow avalanches, rock landslides, or other unidentified drivers, and therefore determining all of the potential major and minor drivers behind sudden surges of meltwater into headwater streams is vital for understanding the hazard profile of the region. The IIT Kanpur team suggests that efforts to help mitigate GLOF events in the future should include the creation of a network of satellite-based monitoring stations that could provide in situ and real-time data on GLOF risk. “The integration of monitoring devices with satellite networks will not only provide telemetry support in remote locations that lack complete cellular connectivity but will also provide greater connectivity in coverage in the cellular dead zones in extreme topographies such as valleys, cliffs, and steep slopes,” the authors explained.