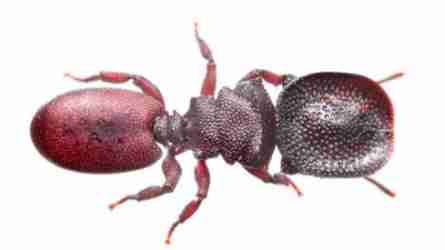 Gut bacteria in a species of herbivorous ant play a major role in processing nutrients that allow the ants to build tough exoskeletons, an international team of researchers has found. In the study, “Gut Bacteria Are Essential for Normal Cuticle Development in Herbivorous Turtle Ants,” which published Jan. 29 in Nature Communications, the researchers specifically broke down which components the bacteria contributed so their host could build a thicker armor. When the researchers killed off the gut microbes in plant-eating turtle ants, their exoskeletons were only half as thick as normal turtle ants. The results reveal diverse roles that gut bacteria can play in organisms. Such findings could possibly offer new directions for biomimicry, using an example from nature to design armor or coatings, with the help of microbes. “This is the first study to show which specific cuticle components come from nutrients provided by symbiotic bacteria,” said senior author Corrie Moreau, the Martha N. and John C. Moser Professor of Arthropod Biosystematics and Biodiversity and director and head curator of the Cornell University Insect Collection in the College of Agriculture and Life Sciences.

In this study, Moreau and colleagues separated colonies of turtle ants and split them in half. One half, a control group, was left alone; in the other half, the gut bacteria were mostly eliminated with antibiotics. The researchers then fed both groups foods enriched with urea, a compound with high nitrogen content. They used a nitrogen isotope in the urea so they could locate where the element might be integrated within the ants. The researchers could then track how much nitrogen the bacteria-free ants were processing on their own, and what contributions the bacteria were making to synthesize the nitrogen.

Since adult ants have fully developed exoskeletons, the feeding regimen was followed throughout the ants’ development, including the larval and pupal stages.

In the end, the researchers measured the exoskeletons and found that cuticles in bacteria-free ants were about half as thick. Using analytic chemistry, Moreau and colleagues then searched for nitrogen isotopes within components of the cuticle. In the control group, the researchers found the isotopes within chitin (a biopolymer that is a primary component in insect exoskeletons), cuticular proteins, and in “cross-linkers,” a component of the cuticle that acts as a connecting fiber.