A new device that could measure the rate of evaporation of a local area within a couple of minutes. 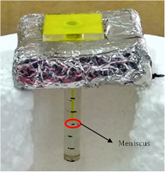 A team of scientists from the Indian Institute of Science (IISc) has developed a new device that could measure the rate of evaporation of a local area within a couple of minutes. The device is a more efficient and inexpensive way to measure evaporation when compared with existing methods. “Our method allows you to get a much more realistic measure of transpiration from plants and evaporation from soils,” says Jaywant H Arakeri, Professor in the Department of Mechanical Engineering, IISc, and senior author of the study recently published in the Journal of Hydrology. Being able to measure the evaporation rate is useful for farmers to gauge water requirements for their fields and in weather stations to characterise the local atmospheric condition. It is also widely used by botanists to study the dynamics underlying transpiration by plants. The proposed device consists of a filter paper connected to a capillary tube that takes water from a reservoir to the filter paper, thereby wetting it and thus mimicking an evaporating water surface. By measuring the distance travelled by the lower meniscus in the capillary tube over a couple of minutes, the evaporation rate is estimated. The innovation lies in being able to measure the very small amount (about 1 microlitre) of water that is lost in evaporation from the surface in a minute.

The device would be useful to scientists studying the physiological process of transpiration in plants because of its ability to measure the evaporation rate over small areas over short periods of time. Stomatal responses can also now be addressed, in a better and more controlled way, using this device. The authors also suggest that it could be used in oceans to study changing evaporation patterns in the open sea and in weather stations to estimate evaporation rates in the atmosphere, an important parameter that is currently not measured. The next step is to make the device commercially available. “We are looking for interested companies to take it up to make it into a product. Meanwhile, we have been doing some experiments in the polyhouse [a kind of greenhouse used to grow crops in a controlled environment], and we also want to try it out in the field,” says Arakeri. The research was published in Journal of Water Process Engineering