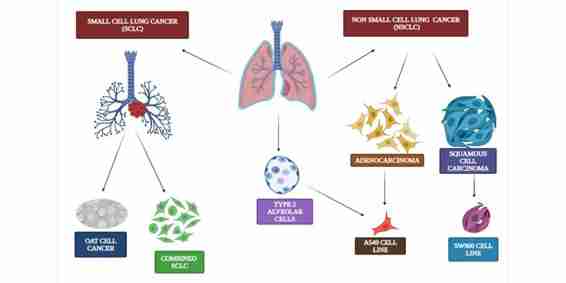 In recent years, a lot of human lung cancer cell lines have been discovered for the purpose of drug discovery. These cell lines furnish us an unending and self replicating reservoir of tumoral cells. The histopathology of lung cancer is classified into non-small cell lung cancer (NSCLC) ( which constitutes adenocarcinoma, squamous cell carcinoma and large cell lung carcinoma) and small cell lung cancer (SCLC). SCLC shows increased aggressiveness and metastatic potential as compared to NSCLC, yet, NSCLC makes up for around 85% share of all lung cancers in the population.

A549 is a NSCLC cell line of the adenocarcinoma origin which is widely used for in vitro experiments. This alveolar cell line has been in use for more than 4 decades. It was extracted from the lung carcinomatous tissue tumor of a 58yr old Caucasian male in 1972, and was cultured by D.J Giard, et al. and lodged in  ATCC cell line bank. These cells are accountable for proper diffusion of electrolytes and water through the alveoli. These cells were identified as being hypotriploid human alveolar basal epithelial cells and are extensively in use as in-vitro models for type 2 pulmonary epithelial cells.

Type 2 alveolar cells account for 5% of the alveolar surface of distal lung, they possess various important roles and serve as the defender of the alveoli and also take part in innate immune responses in the lung. An ultrastructural signature of type 2 cells is the production of multilamellar bodies consisting of dipalmitoylphosphatidylcholine (DPCC) which is the crucial lipid constituent of pulmonary surfactant. A549 cells showed the presence of plentiful multilamellar cytoplasmic inclusion bodies; these cells also manufacture lecithin with disaturated fatty acids employing the cytidine diphosphocholine pathway. They contained extensive amounts of phosphatidylcholine and disaturated phosphatidylcholine. It has been recorded that in this cell line, hypoxia initiates the ERK pathway (Extracellular-signal Regulated Kinase pathway) through LRP1, decreased E-cadherin, increased vimentin and α-SMA, and then heightened A549 cell motility, and caused a switch in cell morphology toward a mesenchymal phenotype and also produced more HSP90α.

3D model systems can bring about different conspicuous changes in the morphology of cancerous cells compared to 2D systems. Previous studies on A549 revealed that they can form floating aggregates or they can be embedded partially onto a hydrogel matrix. Subtle differences were discovered between these two types. These aggregates displayed perpetually high levels of Interleukin-8 (IL-8) and IL-6 production. A549 cells showed over expression of Ki-67 and MMP-9 in 3D system and reduced expression of MMP-9 in 2D system.[14] They also showed an increase in epithelial cell-specific markers and reduced expression of cancer-specific markers, the cell aggregates expressed occludin indicating good localization. The aggregates also produced mucoglycoprotein. It was also observed that mucin-specific antibodies bound with pronounced affinity to MUC1 and MUC5A in these 3D aggregates. Certain studies indicate that 3D cultures of A549 cell lines depict an increase in the overall effect of expression of various epithelial cell specific biomarkers and that they show decreased expression of cancer specific biomarkers when compared to the 2D models. The 3D cell culture of the cell line A549 depicts formation of tight junctions and greater polarity.