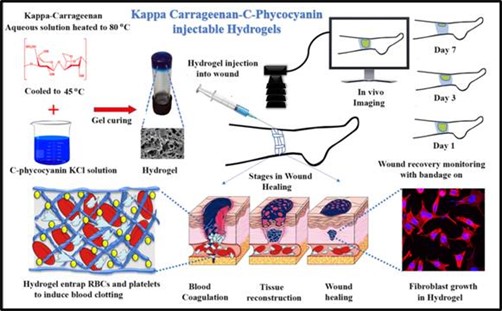 Scientists at the Institute of Nano Science and Technology (INST), Mohali, an autonomous Institute under the Department of Science and Technology (DST), Govt. of India, have recently developed an injectable hydrogel from κappa-carrageenan, a water-soluble polysaccharide found in edible red seaweeds and a pigmented protein called C-phycocyanin found in spirulina. The gelling property of κ-carrageenan was utilized by the researchers along with C-phycocyanin as an injectable and regenerative wound dressing matrix to heal the wound rapidly and also to monitor it progress in real-time. The matrix developed was highly biocompatible. The research published in the journal ‘Acta Biomaterialia’ established the superior haemostatic (blood flow retarding ) capabilities of the combination in traumatic injury conditions.

The hydrogel matrix developed by Dr. Surajit Karmakar and his group is fluorescent and allowed in vivo Near-infrared (NIR) imaging. Thus, it could help monitor the recovery of the wound by taking the time-lapse 3D images of the hydrogel filled wound. Changing depth of the wound bed allow detection of the percentage recovery in wounds. Such types of imaging can allow real-time monitoring of wound repair in internal injuries and diabetic patients where monitoring of wound repair is a challenge. The anti-inflammatory response and rapid blood clotting ability of κ-carrageenan-C-phycocyanin (κ-CRG-C-Pc) further empowered its applicability in rapid blood clotting, anti-inflammation, and appropriate monitoring of accelerated wound recovery. The hydrogel was built by ionic cross-linking of κ-carrageenan monomers (β-d-galactose and 3,6-anhydro-α-d-galactose, linked by α-(1,3) and β-(1,4) glycosidic unions) ) along with C-phycocyanin, which provided an interconnected network of porous material with hydrophilic surface and mechanical stiffness. This porosity allowed nutrients transportation and gaseous exchange across the wound healing site for the proliferation of various cells.

According to the INST group, the synthesized hydrogel will be highly beneficial for people of all age groups in wound healing applications. Its injectable property allowed its application in tough to reach internal injuries without opening the peritoneum of the patients. It also holds promise to be utilized in high altitude frost injury application due to its self-healing properties.

The team is now exploring the mechanism of action of κ-carrageenan-C-phycocyanin (κ-CRG-C-Pc) hydrogel and involvement of signalling pathway for exploring the process of wound healing and regenerative properties. Source: Edited from India Science Wire release