Scientists investigate the evolution of Mimivirus, through how they replicate DNA 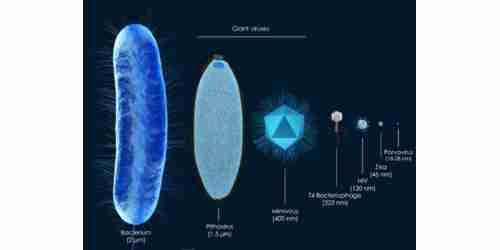 Researchers from the Indian Institute of Technology Bombay shed light on the origins of Mimivirus and other giant viruses, helping us better understand a group of unique biological forms that shaped life on earth. In their latest study published in the journal Molecular Biology and Evolution, the researchers show that giant viruses may have come from a complex single-cell ancestor, keeping DNA replication machinery but shedding genes that code for other vital processes like metabolism. Giant viruses are very common in oceans and other water bodies. They infect single-celled aquatic organisms and have major effects on the latter’s population. Dr. Kiran Kondabagil, molecular virologist at IIT Bombay, suggests, “Because these single-celled organisms greatly influence the carbon turnover in the ocean, the viruses have an important role in our world’s ecology. So, it is just as important to study them and their evolution, as it is to study the disease-causing viruses.”

Dr. Kondabagil and co-researcher Dr. Supriya Patil performed a series of analyses on major genes and proteins involved in the DNA replication machinery of Mimivirus, the first group of giant viruses to be identified. They aimed to determine which of two major suggestions regarding Mimivirus evolution - the reduction and the virus-first hypotheses - were more supported by their results. The reduction hypothesis suggests that the giant viruses emerged from unicellular organisms and shed genes over time; the virus-first hypothesis suggests that they were around before single-celled organisms and gained genes, instead. The researchers created phylogenetic trees with replication proteins and found that those from Mimivirus were more closely related to eukaryotes than to bacteria or small viruses. Additionally, they used a technique called multidimensional scaling to determine how similar the Mimiviral proteins are and their findings showed greater similarity. Finally, the researchers showed that genes related to DNA replication are similar to and fall under purifying selection, which is natural selection that removes harmful gene variants, constraining the genes and preventing their sequences from varying. Such a phenomenon typically occurs when the genes are involved in essential functions (like DNA replication) in an organism. These results imply that Mimiviral DNA replication machinery is ancient and evolved over a long period of time. This narrows us down to the reduction hypothesis, which suggests that the DNA replication machinery already existed in a unicellular ancestor, and the giant viruses were formed after getting rid of other structures in the ancestor, leaving only replication-related parts of the genome.