The research by the Inspire Faculty Fellow, will help understand evolutionary relationships among nearly 140 species of field crickets from India 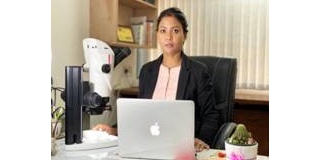 The chirp of the cricket may soon be used to monitor their species diversity. Scientists are establishing an acoustic signal library that can help track the diversity of these insects.

Morphology-based traditional taxonomy has gone a long way to recognise and establish species diversity. But it is often not sufficient in delimiting cryptic species-- a group of two or more morphologically indistinguishable species (hidden under one species) or individuals of the same species expressing diverse morphological features (which are often classified into multiple species). Therefore, identification solely based on morphological features leads to underestimation or overestimation of species diversity.

In order to overcome this challenge, Dr. Ranjana Jaiswara, a Department of Science and Technology (DST) Inspire Faculty Fellow at the Department of Zoology, Panjab University, is working to establish a field crickets acoustic-signal library which can be used as a non-invasive tool in species diversity estimation and monitoring. The library will be a digital one and can be used through mobile phone application for automated species recognition and discovery as well as documentation of new species of crickets from India.

Dr. Jaiswara’s research as a DST-INSPIRE Faculty addresses the problem of cryptic species by using advanced tools in an integrative frame in delineating species boundaries.

These tools include acoustic signals, DNA sequences, and phonotactic behavioural data in studying species diversity. She uses field crickets as the model organism. In her research published in Journal of Zoological Systematics and Evolutionary Research, she has shown that species-specific bioacoustics signals are a highly efficient and reliable tool in marking species boundaries and it can be used to get an accurate estimate of species richness and diversity estimate of any geographical area.

Dr Jaiswara has documented that the issue of cryptic species can be addressed economically with the basic skill of bioacoustic signal and statistical analyses. These integrative approach-based studies have led to the discovery of several cryptic and new species of crickets from India, Brazil, Peru and South-Africa.

Field crickets are one of the most commonly used model organisms in the field of neuroethology, behavioural ecology, experimental biology, and acoustics because of their unique ability to produce loud acoustic signal by rubbing of highly specialised forewings against each other.

Dr Jaiswara plans to build a phylogenetic relationship and understand evolutionary relationships among approximately 140 species of field crickets known from India. This study will provide an evolutionary frame structure to the scientific community at a global level.