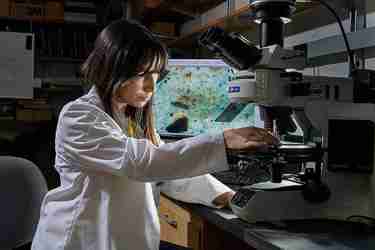 Concrete is not glamorous. It is the workhorse of building materials: versatile, durable, and almost universally ubiquitous, with 30 billion tons of concrete produced every year. Cement, a component of concrete, produces 8% of the world’s carbon footprint. Looking to lower that percentage, Purdue University engineers have discovered a way to make concrete more sustainable. Their new recipe for concrete has the potential to cut carbon emissions dramatically, creating building blocks for a better world.

A team lead by Mirian Velay-Lizancos, an assistant professor of civil engineering at Purdue, proposes adding small amounts of nanoscale titanium dioxide to the cement paste that makes up concrete. The team found that titanium dioxide, a powdery substance known best for its uses in sunscreen, paints, plastics and food preservatives, enhances concrete’s natural ability to sequester carbon dioxide. The team discovered that adding only small amounts of nano-titanium dioxide nearly doubles concrete’s absorption of the problematic greenhouse gas. The study recently appeared in the scientific journal Construction and Building Materials

The staggering amount of concrete used across the world today—in bridges, in roads and infrastructure, in buildings and monuments, dams and pipe systems—means that any slight improvement in the carbon footprint of concrete could add up to massive effects worldwide.

The changes Velay-Lizancos’ team proposes would result in more than a slight change. Her research indicates that including titanium dioxide in the cement mix used to make concrete can double to the amount of carbon dioxide it naturally sequesters in the same amount of time. This effect is in addition to concrete’s well-studied photocatalytic effect, where ultraviolet light from sunshine interacts with concrete to help concrete oxidize harmful nitrogen oxide gases into nitrates.

Initially, Velay-Lizancos and two of her doctoral students, Carlos Moro and Vito Francioso,  were studying how titanium dioxide might interact with cement to make concrete stronger and how curing temperature might affect those interactions. They noticed that some of their concrete samples that included nano-titanium dioxide absorbed carbon dioxide from the surrounding air faster than other samples. Further investigation revealed that adding nano-titanium dioxide to the concrete mix decreased the size of calcium hydroxide molecules, making it vastly more efficient at absorbing carbon dioxide than other cement pastes. The addition accelerated the rate of carbon absorption and increased the total volume of carbon dioxide it can absorb.