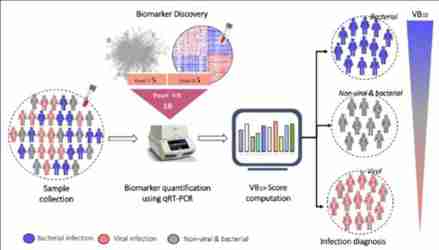 A recent study from the Indian Institute of Science (IISc) has identified a set of molecular biomarkers that can be used in the differential diagnosis of acute bacterial and viral infections. These biomarkers are different messenger RNA (mRNA) molecules found in the blood; differences in their levels can detect and predict with high probability if an infection is viral or bacterial. A quick method to detect acute viral and bacterial infections and distinguish between them can be immensely useful in the clinic, as accurate diagnosis will win half the battle and guide the clinician towards the optimal treatment path. It will also prevent the rise of such antimicrobial resistance. In the new study, published in the journal EBioMedicine, the researchers have developed such a test using patient blood transcriptomes and sophisticated computational modelling.

A transcriptome is a full set of mRNA molecules expressed by a biological cell, which is measured using Next-Generation Sequencing (NGS) technologies. During an infection, there are specific genes that get turned on and these in turn lead to higher amounts of specific mRNAs and ultimately higher amounts of the corresponding proteins. The scientists analysed transcriptomic data of patients (from publicly available databases, and samples collected from MS Ramaiah Medical College in collaboration with a clinical team) and discovered a ten-gene RNA signature in the patients’ blood that is produced in varying quantities for viral and bacterial infections. To make it useful in the clinic, the researchers devised a standalone score called VB10, which could be used for diagnosis, monitoring the stage of recovery after infection, and estimating the severity of the infection. VB10 accurately indicated whether a given blood sample had a bacterial or viral infection, across different bacteria and viruses and across different age groups. The authors suggest that the test could be useful for differentiating COVID-19 infection from bacterial infections as well. In the study, they looked at various viral infections for which transcriptomic data is publicly available. This allowed them to develop a generic VB10 test score for viral infections. As soon as transcriptomic data became available for COVID-19, the team tested their approach and found that the test scores could differentiate between SARS-CoV-2 infection and common bacterial respiratory infections.