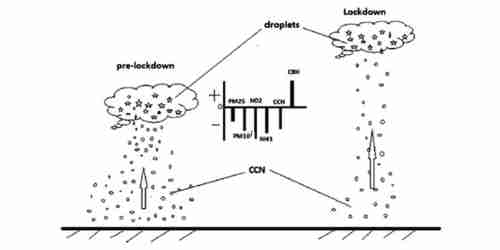 As a result of the lockdowns imposed by many nations to control the spread of COVID-19 pandemic, a dramatic decline in air pollution was observed across the globe. Researchers at the Indian Institute of Tropical Meteorology (IITM, Pune) conducted a study to gain a better understanding of the complex role of air pollution on weather and climate. Height of cloud base and the drop in air pollution is what the researchers tried to correlate in this study.

As a result of the complete lockdown imposed by the Government of India to stop the spread SARS-CoV-2 virus from March 25 to April 14, 2020, the highways and streets of cities became almost empty and devoid of any public transport. This has led to an unprecedented reduction of air pollutants which rejuvenated the atmosphere. The air became so clean that the Himalayan mountain range became visible through naked eyes from many parts of northern India including Delhi for the first time in 30 years. IITM Scientists observed a massive drop in anthropogenic aerosols over the Delhi region during this first Lockdown and as a result, the concentration of cloud-condensation nuclei (CCN) at lower level decreased. At a higher level, due to lower temperature, super-saturation was achieved with lower number of CCN to produce enough droplets to form a cloud base. Thus it appeared that effectively the clouds propagated upwards during the first lockdown period.

The research published in Science of the Total Environment says that ‘lockdown-spiked simulation’ produced a good match with the actual condition that was seen on the ground. “This did feature a reduction in the low-level cloud,” said the main author. Results of the study revealed that the percentage of low clouds with bases located below 3 km above the ground was 63% of the total clouds in the pre-lockdown period while it reduced to 12% during the lockdown. The clouds with a base above 6 km increased from 10% to 48% from pre-lockdown to lockdown. Though little effect on other meteorological parameters like air temperature (AT), relative humidity (RH), radiation (UV), wind speed (WS) etc. were observed, the significant change in cloud base height has occurred due to reduction in CCN with cut off in pollution due to the lockdown. The team used Ceilometer to measure cloud base height profiles. Atmospheric chemistry and meteorology simulations were done using air-pollution data from Delhi between March 25 and April 15, 2020, the most stringent lockdown period in India.