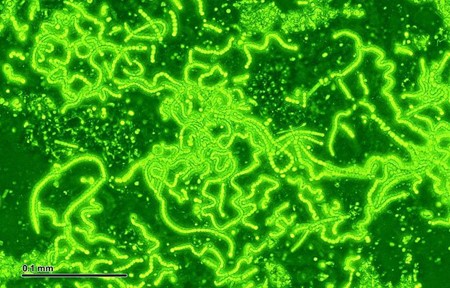 Cyanobacteria are a type of unicellular organisms that can utilize sunlight and synthesize their food. Their ability to carry out photosynthesis makes them excellent candidates in the field of biotechnology for the production of desired chemicals and proteins. To kick-start this process, scientists use promoters, which are the parts of DNA from suitable organisms, including cyanobacteria, that dictate the production of the required protein. Now, researchers from the Indian Institute of Technology Bombay (IIT Bombay) have developed a set of promoters that can boost protein production, are tolerant to light and work well with different strains of cyanobacteria. The study, published in the journal ACS Synthetic Biology, was funded by the Department of Biotechnology, Government of India.

The researchers evolved two promoters, P rbcL and P cpcB that are already present in cyanobacteria and which are known to spur a high production of proteins. They created mutations in the promoters to make a library of 36 mutant promoters of P rbcL and 12 of P cpcB. Then, they introduced them into Synechococcus elongatus, a fast-growing cyanobacterium, and noted their influence on the production of a protein called enhanced yellow fluorescent protein (eYFP), which is easy to observe in experiments. All except eight of the P rbcL promoters showed six to eight times higher production of the protein than usual even with elevated concentrations of carbon dioxide. Similarly, all 12 of the mutated P cpcB promoters showed heightened activity under high light intensities as well.

“The promoters that we have developed do not require any chemical inducers,” says Dr Annesha Sengupta, a researcher involved in the study. “Unlike the promoters that are generally used in cyanobacteria for production, we have developed a set of promoters whose activity can be tweaked using environmental parameters such as carbon dioxide and light. Hence, there is no additional cost involved when these promoters are used.” (Source: IIT Bombay Research Highlights written by Nagashree Avabhrath)