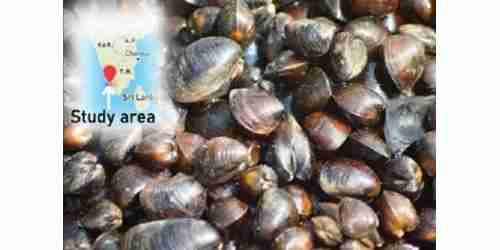 A research team in India has concluded that black clams (Villorita cyprinoides) can provide potential early warning information on marine pollution that can help environmental scientists to monitor and manage the overall fitness of the marine environment. In this integrated study involving observation of critical bio-lethal parameters coupled with a bioassay of the black clams, sensitive information could be obtained by the scientists. Results of the study revealed that information on sublethal exposure of metal lead (Pb) and its toxic effects on the black clam is an important precursor to assess pollution in a marine environment. The study also helped them to make a reliable risk assessment of other aquatic lives for enforcing stringent water quality management practices. The study showed that there was significantly higher pollution of heavy metals in the northern parts of the estuarine system water sample of the southwest coast of India during pre-monsoon, followed by monsoon and post-monsoon, except for lead and nickel. The research revealed that the alterations in antioxidant enzyme activities in black clams may lead to biochemical senescence. The utility of the study of cellular, physiological, biochemical, and histopathological biomarker responses was established in the study that can be used to monitor aqueous contamination of heavy metal.

The study found a significant increase in the concentration of leads (Pb) in the bodies of clams after chronic exposure. Even a small concentration of lead in the estuary can lead to many-fold increase in its concentration in black clams which may damage the genetic materials, proteins and lipid and lead to health risks to other marine organisms including humans consuming them. As per researchers, metal concentration was found to be higher in the sediment during pre-monsoon and post-monsoon periods, except for lead and nickel in the estuary which might be due to the weaker flushing leading to the entrapment of metals in the sediment. Over a longer period, they can therefore help prevent the spread of harmful metal sediments into waterways used by local communities. A reduced discharge from the Periyar River was observed during the study, which may also lead to the increasing concentration of metals during pre-monsoon in the sediment. The researchers of this study found a direct correlation between the degree of industrialization and contamination of the Cochin Estuarine System (CES) of India's southwest coast by heavy metals leading to metabolic stress in black clams.