Wireless activation of targeted brain circuits in less than one second 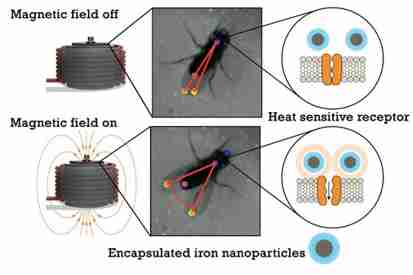 Researchers from Rice University, Duke University, Brown University and Baylor College of Medicine developed a magnetic technology to wirelessly control neural circuits in fruit flies. They used genetic engineering to express heat-sensitive ion channels in neurons that control the behavior and iron nanoparticles to activate the channels. When researchers activated a magnetic field in the flies’ enclosure, the nanoparticles converted magnetic energy to heat, firing the channels and activating the neurons. An overhead camera filmed flies during experiments, and a visual analysis showed flies with the genetic modifications assumed the wing-spread posture within approximately half a second of receiving the magnetic signal. (Figure courtesy of C. Sebesta and J. Robinson/Rice University)

A research team led by Rice University neuroengineers has created wireless technology to remotely activate specific brain circuits in fruit flies in under one second.

In a published demonstration in Nature Materials, researchers from Rice, Duke University, Brown University and Baylor College of Medicine used magnetic signals to activate targeted neurons that controlled the body position of freely moving fruit flies in an enclosure.

“To study the brain or to treat neurological disorders the scientific community is searching for tools that are both incredibly precise, but also minimally invasive,” said study author Jacob Robinson , an associate professor in electrical and computer engineering at Rice and a member of Rice's Neuroengineering Initiative . “Remote control of select neural circuits with magnetic fields is somewhat of a holy grail for neurotechnologies. Our work takes an important step toward that goal because it increases the speed of remote magnetic control, making it closer to the natural speed of the brain.”

“We made progress because the lead author, Charles Sebesta, had the idea of using a new ion channel that was sensitive to the rate of temperature change,” Robinson said. “By bringing together experts in genetic engineering, nanotechnology and electrical engineering we were able to put all the pieces together and prove this idea works. This was really a team effort of world-class scientists we were fortunate enough to work with.”

The researchers used genetic engineering to express a special heat-sensitive ion channel in neurons that cause flies to partially spread their wings, a common mating gesture. The researchers then injected magnetic nanoparticles that could be heated with an applied magnetic field. An overhead camera watched flies as they roamed freely about an enclosure atop an electromagnet. By changing the magnet’s field in a specified way, the researchers could heat the nanoparticles and activate the neurons. An analysis of video from the experiments showed flies with the genetic modifications assumed the wing-spread posture within approximately half a second of the magnetic field change.

Robinson said the ability to activate genetically targeted cells at precise times could be a powerful tool for studying the brain, treating disease and developing direct brain-machine communication technology.

Robinson is principal investigator on MOANA, an ambitious project to develop headset technology for nonsurgical, wireless, brain-to-brain communication . Short for “magnetic, optical and acoustic neural access,” MOANA is funded by the Defense Advanced Research Projects Agency ( DARPA) to develop headset technology that can both “read,” or decode, neural activity in one person’s visual cortex and “write,” or encode, that activity in another person’s brain. The magnetogenetic technology is an example of the latter.

Robinson’s team is working toward a goal of partially restoring vision to patients who are blind. By stimulating parts of the brain associated with vision, MOANA researchers hope to give patients a sense of vision even if their eyes no longer work.

“The long-term goal of this work is to create methods for activating specific regions of the brain in humans for therapeutic purposes without ever having to perform surgery,” Robinson said. “To get to the natural precision of the brain we probably need to get a response down to a few hundredths of a second. So there is still a ways to go.”