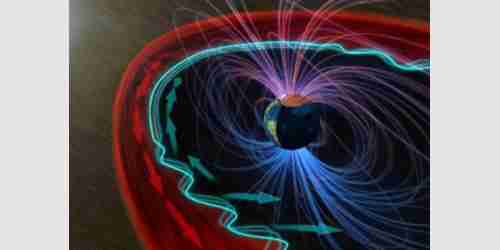 The Sun releases a stream of charged particles called the solar wind. On the Earth’s surface, we are protected from this barrage by the magnetosphere – a bubble created by the Earth’s magnetic field. When the solar wind hits the magnetosphere, waves of energy are transferred along the boundary between the two. Scientists thought the waves should ripple in the direction of the solar wind, but the new study, published in Nature Communications, reveals some waves do just the opposite. Previously, lead researcher Dr Martin Archer, from the Department of Physics at Imperial, and his colleagues established the magnetosphere’s boundary vibrates like a drum. When a drumstick-like pulse from the solar wind strikes the very front of our magnetospheric bubble, waves race toward Earth’s magnetic poles and get reflected back. The latest work considers the waves that form across the entire surface of the magnetosphere, using a combination of models and observations from NASA’s THEMIS (Time History of Events and Macroscale Interactions during Substorms) satellites.

The researchers found when solar wind pulses strike the magnetosphere, the waves that form not only race back and forth along Earth’s field lines, but also travel against the solar wind.

The team used models to illustrate how the energy of the wind coming from the Sun and that of the waves going against it could cancel each other out, creating ‘standing waves’ that involve a lot of energy but appear to go nowhere. These standing waves can persist longer than those that travel with the solar wind. That means they’re around longer to accelerate particles in near-Earth space, leading to potential impacts in regions like Earth’s radiation belts, aurora, or ionosphere. The researchers also say that standing waves may occur elsewhere in the universe, from the magnetospheres of other planets to the peripheries of black holes.

The researchers also translated the electromagnetic signals from the THEMIS satellites into audio, allowing us to listen to the sounds of the waves travelling across the magnetospheric boundary. Dr Archer added: “While in a simulation we can see what’s going on everywhere, satellites can only measure these waves where they are giving us only time-series, wiggly lines. This sort of data is actually best suited to our sense of hearing than sight, so listening to the data can often give us a more intuitive idea of what’s going on.