Exploring the mechanics of anthrax infection, scientists have discovered two proteins that are involved in controlling the levels of cholesterol in the membrane of our cells. 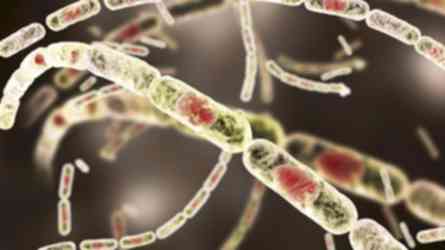 “What our work shows is how a complex in the center of the cell, the ER-Golgi interaction region, controls plasma membrane cholesterol, which is essential for many cellular functions, if not essential for multicellular life,” says Professor Gisou van der Goot at EPFL’s School of Life Sciences. Her group, working with the group of Giovanni D’Angelo at EPFL, have published a study, in Development Cell, uncovering how pathogens exploit a key cellular process to intoxicate cells.

Since pathogens have evolved to hijack many of their hosts’ cellular processes, studying host-pathogen interactions help us better understand fundamental biological processes. Here, the scientists found that the interaction between two key organelles in the cell, the endoplasmic reticulum and the Golgi apparatus, is essential to control which lipids are at the cell membrane. Both organelles play essential roles in synthesizing new proteins and their transport within the cell.

The researchers set out to find which proteins are important for the toxin from the anthrax bacterium Bacillus anthracis to enter the cell. To do this, they screened a library of 1500 genes that are normally involved in organizing the cell’s organelles as well as its membrane.

The anthrax toxin is made up of three subunits, a Protective Antigen that allows it to bind receptors on the target cell, and two enzymatic subunits, the lethal factor and the edema factor, which are what actually cause damage to the cell.

When secreted, the Protective Antigen binds two receptors on the cell’s membrane. It is then cut up by Furin, an enzyme, and finally associates with other Protective Antigens to form a pore. This pore allows the lethal and edema factors to enter the cell, where they wreak havoc. Although this process is fairly well mapped out, we don’t know which molecules within the cell facilitate all its steps.

From anthrax to biological discovery

The data from the screened genes landed on two genes and their proteins, called TMED2 and TMED10, both of which are located at the ER-Golgi contact sites, a very unexpected location when studying a toxin that comes from the outside of the cell.

When the scientists downregulated the genes of TMED2 and TMED10, the anthrax toxin lost its ability to form pores. Further, in-depth analysis uncovered something new in terms of basic cell biology: that the two proteins organize large protein supercomplexes at ER-Golgi membrane contact sites, which are responsible for the transfer of cholesterol between the two organelles. If this transfer does not occur, cholesterol never gets to the membrane of the cell, and is instead stored in fat droplets.

“Overall, this study of anthrax intoxication led to the discovery that lipid compositional remodeling at ER-Golgi interfaces fully controls the formation of functional membrane nanodomains at the cell surface,” conclude the study’s authors.