What quantum information and snowflakes have in common, and what we can do about it

Scientists demonstrated that it could read out the signals from a type of qubit called a superconducting qubit using laser light—and without destroying the qubit at the same time. 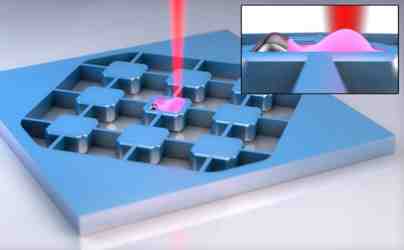 Artist's depiction of an electro-optic transducer, an ultra-thin device that can capture and transform the signals coming from a superconducting qubit. (Credit: Steven Burrows/JILA)

Qubits are a basic building block for quantum computers, but they’re also notoriously fragile—tricky to observe without erasing their information in the process. Now, new research from CU Boulder and the National Institute of Standards and Technology (NIST) may be a leap forward for handling qubits with a light touch.

In the study, a team of physicists demonstrated that it could read out the signals from a type of qubit called a superconducting qubit using laser light—and without destroying the qubit at the same time.

The group’s results could be a major step toward building a quantum internet, the researchers say. Such a network would link up dozens or even hundreds of quantum chips, allowing engineers to solve problems that are beyond the reach of even the fastest supercomputers around today. They could also, theoretically, use a similar set of tools to send unbreakable codes over long distances.

The study, published June 15 in the journal Nature, was led by JILA, a joint research institute between CU Boulder and NIST.

“Currently, there’s no way to send quantum signals between distant superconducting processors like we send signals between two classical computers,” said Robert Delaney, lead author of the study and a former graduate student at JILA.

Quantum computers, which run on qubits, get their power by tapping into the properties of quantum physics, or the physics governing very small things. Delaney explained the traditional bits that run your laptop are pretty limited: They can only take on a value of zero or one, the numbers that underly most computer programming to date. Qubits, in contrast, can be zeros, ones or, through a property called “superposition,” exist as zeros and ones at the same time.

But working with qubits is also a bit like trying to catch a snowflake in your warm hand. Even the tiniest disturbance can collapse that superposition, causing them to look like normal bits.

In the new study, Delaney and his colleagues showed they could get around that fragility. The team uses a wafer-thin piece of silicon and nitrogen to transform the signal coming out of a superconducting qubit into visible light—the same sort of light that already carries digital signals from city to city through fiberoptic cables.

“Researchers have done experiments to extract optical light from a qubit, but not disrupting the qubit in the process is a challenge,” said study co-author Cindy Regal, JILA fellow and associate professor of physics at CU Boulder.

There are a lot of different ways to make a qubit, she added.

Some scientists have assembled qubits by trapping an atom in laser light. Others have experimented with embedding qubits into diamonds and other crystals. Companies like IBM and Google have begun designing quantum computer chips using qubits made from superconductors.

Superconductors are materials that electrons can speed around without resistance. Under the right circumstances, superconductors will emit quantum signals in the form of tiny particles of light, or “photons,” that oscillate at microwave frequencies.

And that’s where the problem starts, Delaney said.

To send those kinds of quantum signals over long distances, researchers would first need to convert microwave photons into visible light, or optical, photons—which can whiz in relative safety through networks fiberoptic cables across town or even between cities. But when it comes to quantum computers, achieving that transformation is tricky, said study co-author Konrad Lehnert.

In part, that’s because one of the main tools you need to turn microwave photons into optical photons is laser light, and lasers are the nemesis of superconducting qubits. If even one stray photon from a laser beam hits your qubit, it will erase completely.

“The fragility of qubits and the essential incompatibility between superconductors and laser light makes usually prevents this kind of readout,” said Lehnert, a NIST and JILA fellow.

To get around that obstacle, the team turned to a go-between: a thin piece of material called an electro-optic transducer.

Delaney explained the team begins by zapping that wafer, which is too small to see without a microscope, with laser light. When microwave photons from a qubit bump into the device, it wobbles and spits out more photons—but these ones now oscillate at a completely different frequency. Microwave light goes in, and visible light comes out

In the latest study, the researchers tested their transducer using a real superconducting qubit. They discovered the thin material could achieve this switcheroo while also effectively keeping those mortal enemies, qubits and lasers, isolated from each other. In other words, none of the photons from the laser light leaked back to disrupt the superconductor.

“Our electro-optic transducer does not have much effect on the qubit,” Delaney said.

The team hasn’t gotten to the point where it can transmit actual quantum information through its microscopic telephone booth. Among other issues, the device isn’t particularly efficient yet. It takes about 500 microwave photons, on average, to produce a single visible light photon.

The researchers are currently working to improve that rate. Once they do, new possibilities may emerge in the quantum realm. Scientists could, theoretically, use a similar set of tools to send quantum signals over cables that would automatically erase their information when someone was trying to listen in. Mission Impossible made real, in other words, and all thanks to the sensitive qubit.