What it takes to eat a poisonous butterfly 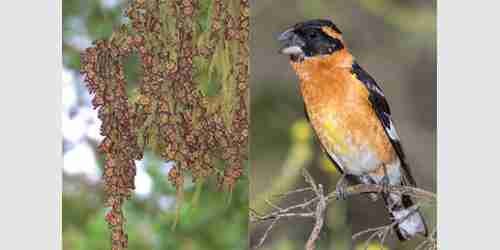 Where monarch butterflies overwinter by the thousands to millions (left, a cluster in California), the black-headed grosbeak (right) is one of few birds that can eat them without vomiting. (Photo courtesy of Mark Chappell, UC Riverside)

Monarch butterflies and their close relatives thrive on poisonous milkweed, thanks to genetic mutations that block the effects of the plant’s toxins while allowing the poisons to accumulate in the caterpillar or adult insects as deterrents to hungry predators.

Turns out some of those insect-eating predators evolved similar mutations in order to feast on monarchs.

In a study appearing in the journal Current Biology, researchers at the University of California, Berkeley, and UC Riverside report monarch-like genetic mutations in the genomes of four organisms that are known to eat monarchs: the black-headed grosbeak, a migratory bird that snacks on the butterflies at their overwintering home in Mexico; the eastern deer mouse, a close relative of the Mexican black-eared deer mouse that feeds on butterflies that fall to the ground; a tiny wasp that parasitizes monarch eggs; and a nematode that parasitizes insect larvae that feed on milkweed.

All four organisms have evolved mutations in one or more copies of a gene for the sodium-potassium pump — the same mutations, in fact, as milkweed butterflies, and ones that the researchers and their collaborators showed two years ago were critical to the monarch’s ability to eat milkweed without succumbing to its toxins.

The toxins are cardiac glycosides that interfere with this pump, which helps enable heartbeats and nerve firing. It’s so important in humans that we use a third of all the energy we generate from food to power the pump. It’s not surprising, then, that when the toxins throw a wrench in the pump, the heart and other organs stop, too. Even horses and humans can die of cardiac arrest if they consume enough of the milkweed toxins, which are still used as an arrow poison by hunter-gatherer groups in Africa and South America. Until recently, small amounts of related chemicals from foxglove were widely used to treat congestive heart failure.

“The toxins move up the food chain from plants — what biologists call the first trophic level — to insect herbivores, the second, and then to predators and parasitoids — a third trophic level,” said evolutionary biologist Noah Whiteman, UC Berkeley professor of integrative biology and of molecular and cell biology. “In response, the predators and parasitoids have evolved resistance to the toxins at the same sites that we discovered were changing in the monarch, and sometimes to the same amino acids. This might be the first time that the same resistance mutations have been found in the third and second trophic levels that evolved in response to the latter feeding on toxic plants.”

Birds do it, wasps do it. Even nematodes do it.

Since the 1980s, biologists have known that monarchs and a few other butterflies, and even some beetles, aphids and other insects, have adapted to feeding on milkweed plants and storing the toxins in their bodies — even through metamorphosis — to deter predators. In the last decade, geneticists tracked down the actual genetic mutations that allowed this, all of which were in the sodium pump and allowed the pump to work, despite the toxins. Whiteman speculated that those animals that eat the butterflies must have evolved resistance mutations as well. But were they the same?

When the genome of the black-headed grosbeak was published last year, Whiteman and Groen immediately looked for and found sodium pump mutations nearly identical to those that evolved in the monarch. The researchers subsequently expanded the study, scanning previously sequenced genomes from other monarch-eating animals, and found similar mutations.

The black-headed grosbeak (Pheucticus melanocephalus), a summer resident of California, migrates to Mexico and is known for gobbling up monarchs at the places where they overwinter in the mountains of Michoacán state. One study found that the black-headed grosbeak and another bird, the black-backed oriole (Icterus abeillei), consumed hundreds of thousands to 1 million monarchs over a single winter.

It was evident from their behavior, however, that the two birds were not equally resistant to the milkweed toxins stored in the butterfly’s body. While the grosbeak would tear off the wings and consume the abdomen whole, the oriole would gut the abdomen after de-winging the butterfly and eat only the insides. The outside, or cuticle, has a higher concentration of cardiac glycoside toxins, as do the wings. Orioles also discarded monarchs with higher levels of cardiac glycosides.

The new study reveals how the grosbeak can tolerate the toxins in the monarch: It has evolved single-nucleotide mutations in its sodium pump genes in two of the same three locations where monarchs evolved mutations that help make them the most resistant organism to the milkweed’s cardiac glycosides. None of the other 150 or so sparrow-related “passerine” birds whose genomes are known has these mutations in both of the most widely expressed copies of the sodium pump gene. The oriole’s genome has yet to be sequenced.

“It solves this mystery from 40 years ago where the biology was pretty well worked out, but we just couldn’t go down to the lowest level of organization possible, the genome, to see how grosbeaks are doing this,” Whiteman said. “It looks like, amazingly, they are evolving resistance using the same kind of machinery in the same places in the genetic code as the monarch and the aphids, the bugs and the beetles, that feed on milkweeds, as well.”

Is there broad resistance in the food chain?

The biologists found that the wasp (Trichogramma pretiosum) also has two mutations in the same place as the monarch in the sodium pump gene. The nematode (Steinernema carpocapsae) has changes at all three locations in the sodium pump gene that also evolved in the monarch butterfly, including the one location that confers the most resistance. These nematodes have been found in the soil around milkweed plants in New York and may parasitize the grubs of beetles that feed on milkweed roots and presumably the larvae of other insects, including butterflies.

The fact that the eastern deer mouse (Peromyscus maniculatus) — a close relative of the black-eared deer mouse (P. melanotis), a monarch-feeding specialist — has all three mutations in its most widely expressed copies of the sodium pump gene was already known and not surprising, Whiteman said. The rat and other rodents have mutations in their sodium pump genes that allow them to resist cardiac glycosides and other substances that would be toxic to other mammals.

It’s unclear whether there are additional adaptations that help the black-headed grosbeak and other monarch predators like the black-eared deer mouse deal with the toxins, Groen said. He is planning to explore this question in future studies. Whiteman suspects that other organisms in the food chain that starts with milkweed will be found to have mutations similar to those found in the monarch.

“My guess is, there are other parasitoids out there, and predators that have also evolved resistance mutations that are interacting with monarchs, and it’s just a matter of time before they’re discovered,” he said. “We know that this isn’t the only way to evolve resistance to cardiac glycosides, but it seems to be the predominant way — targeting this particular pump.”