Whales eat microplastic up to 10 million pieces per day 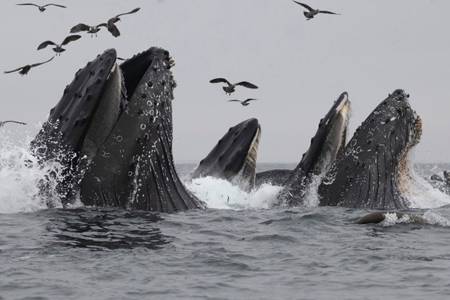 The largest animals ever known to have lived on Earth ingest the tiniest specks of plastic in colossal amounts, Stanford University scientists have found.

Published in Nature Communications, the study focuses on blue, fin, and humpback whales and their consumption of plastic fragments no bigger than a few grains of sand, which are commonly called microplastics. The authors combined measures of microplastic concentrations up and down the water column off the coast of California with detailed logs of where hundreds of whales carrying tracking devices foraged for food between 2010 and 2019.

They found the whales predominantly feed 50 to 250 meters below the surface, a depth that coincides with the highest concentrations of microplastic in the open ocean. The planet’s biggest creature – the blue whale – ingests the most plastic, at an estimated 10 million pieces per day as it feeds almost exclusively on shrimplike animals called krill.

“They’re lower on the food chain than you might expect by their massive size, which puts them closer to where the plastic is in the water. There’s only one link: The krill eat the plastic, and then the whale eats the krill,” said study co-author Matthew Savoca, a postdoctoral scholar at Hopkins Marine Station, Stanford’s marine laboratory on the Monterey Peninsula.

Humpback whales subsisting primarily on fish such as herring and anchovies ingest an estimated 200,000 pieces of microplastic per day, while those eating mostly krill ingest at least 1 million pieces. Fin whales, which feed on both krill and fish, ingest an estimated 3 million to 10 million microplastic pieces per day. Consumption rates are likely even higher for whales foraging in more polluted regions, such as the Mediterranean Sea, Savoca said.

The authors found nearly all the microplastics that whales consume come from their prey, not from the enormous volumes of seawater that these whales gulp when lunging to capture swarms of krill and small fish.

This is a troubling discovery because it suggests whales may not be getting the nutrition needed to thrive, said lead study author Shirel Kahane-Rapport, who worked on the research as PhD student in the Goldbogen Lab at Stanford.

“We need more research to understand whether krill that consume microplastics grow less oil rich, and whether fish may be less meaty, less fatty, all due to having eaten microplastics that gives them the idea that they’re full,” said Kahane-Rapport. If true, this would mean each energetically expensive lunge by a whale may reap fewer calories – a price that an animal the size of an 18-wheeler can ill afford. “If patches are dense with prey but not nutritious, that is a waste of their time, because they’ve eaten something that is essentially garbage. It’s like training for a marathon and eating only jelly beans,” said Kahane-Rapport, who is now an NSF postdoctoral scholar at California State University, Fullerton.

The research builds on more than a decade of data collection and analysis through which Goldbogen and his collaborators have answered seemingly simple but fundamental questions such as how much whales eat, how they feed, why they grow so big (but not bigger), and how slowly their hearts beat. They use a range of technologies, including drones and sensor-laden devices known as biologging tags, which Goldbogen’s team suction-cups to whales’ backs to collect movement and physiological data. From small research boats, they also deploy echosounders, which use sound waves to map the depth and density of fish and krill patches close to where whales are feeding.

This is the first time the group’s rare trove of detailed information about whales’ lives and biology has been connected to plastic pollution, a rapidly proliferating problem that adds to threats from noise, chemical, and biological pollution. “For species struggling to recover from historical whaling alongside other anthropogenic pressures, our findings suggest that the cumulative impacts of multiple stressors require further attention,” the authors write.

Whales are hardly alone in their consumption of plastic, which was first reported in marine food webs 50 years ago and has now been found in at least 1,000 species. “The unique concern for whales is that they can consume so much,” said Savoca.

“Large filter feeders like baleen whales evolved to process and filter vast amounts of the ocean, so they represent sentinels of environmental change including pollution like microplastics,” said senior study author Jeremy Goldbogen, an associate professor of oceans at the Stanford Doerr School of Sustainability.

Scientists continue to investigate what happens with microplastic ingested by whales. “It could be scratching the linings of their stomach. It could be absorbed into the bloodstream, or it could all pass through the animal. We don’t know yet,” said Kahane-Rapport, whose research at CSU Fullerton centers on taking inspiration from whales’ sieve-like baleen plates to develop better systems for filtering out plastic fragments and other unwanted materials in industrial settings, such as wastewater treatment plants.

The new results represent an important first step toward understanding potential chemical and physiological effects of microplastics on whales and other large filter-feeding animals, said Goldbogen. Next steps include examining how oceanographic forces create dense patches of both microplastics and prey, and how microplastics affect the nutritional value of key prey species for not only baleen whales but also an array of economically and ecologically important ocean species.

“Understanding more about the basic biology of baleen whales and whale ecosystems through the use of new technologies like drones, biologging tags, and echosounders enable us to perform important translational research in sustainability and beyond,” said Goldbogen.