Scientists have created an innovative way to build synthetic molecules that can target these previously “undruggable” transcription factors. 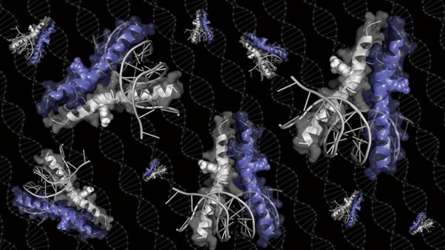 University of Chicago scientists announced they have created an innovative way to build synthetic molecules that can target previously “undruggable” proteins that are known to be active in cancer and other diseases. Above: An illustration of the structure of the molecule as it clamps onto DNA.

For decades, cancer researchers have longed for a way to target a set of proteins called transcription factors. While we’ve long known that tumors use these proteins to grow out of control, their unique configurations meant that for more than 30 years they had earned a reputation as “undruggable.”

A group of University of Chicago scientists announced they have created an innovative way to build synthetic molecules that can target these previously “undruggable” transcription factors. The breakthrough, published Oct. 27 in Nature Biotechnology, holds promise for drugs and treatments as well as tools to better understand cancer biology.

“Doctors have had a hit list of transcription factors for decades, but we have lacked a way to target them,” said UChicago chemist Raymond Moellering, the senior author on the study. “This work sets the stage for letting us go directly for any transcription factor.”

As scientists have detangled the complicated workings of the cell, one thing that has become clear over the years is the importance of a class of proteins called transcription factors.

These proteins act like the pilots of the cell’s DNA, deciding which parts of the genome to turn on and off and when. This is an enormous power, which means they are a prime target for cancerous malfunctions. For example, the role of one well-known transcription factor called Myc is to turn cell growth on and off. If a tumor manages to hijack Myc, it’s like taping a brick to the gas pedal. The cells grow out of control.

“If you ask clinicians what they want in order to treat cancer, it’s a way to inhibit Myc,” said Moellering, an associate professor of chemistry whose area of expertise is developing new chemical tools and technologies to study proteins.

Moellering’s lab took a new approach. They built a synthetic molecule that borrowed part of Myc’s configuration—the claws that latch onto DNA.

“Right away when we ran the gels, we could see that we had cracked the code for the right configuration,” said Moellering.

The synthetic molecules bind very tightly to Myc’s landing point, preventing Myc from latching on. In petri dish tests, the molecules have successfully blocked the growth of cancer cells that are known to rely on Myc. These molecules are also compact enough to slip in and out of the cell, and stable enough to stick around for days before being broken down by the cell.

There is a long way before any molecule would be approved for use on humans, but they are seeing encouraging results in animal trials, the scientists said.

This is partly because transcription factors aren’t just important in cancer; they are involved in everything from aging to diabetes to autoimmune disease. “In other diseases, maybe you want to turn on a set of genes instead of turning them off; or block one and turn up another,” said Moellering.

The synthetic molecules could also be used to help researchers better understand the mechanisms of cancer and other diseases—many of which remain mysterious.

“There are many different directions where you could imagine using platforms like this,” said Moellering.

The scientists are working with the Polsky Center for Entrepreneurship and Innovation at the University of Chicago to help commercialize the discovery.