Want to survive a mass extinction event? Ask the ancient lizards how 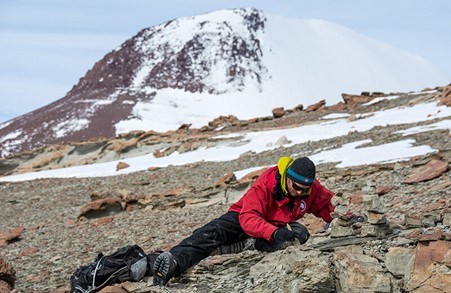 Hank Woolley’s fieldwork has exposed him to extreme climates, including the blistering cold of Antarctica. (Photo: Mike Lucibella, USAP.)

About 65 million years ago, a giant asteroid smashed into Earth, likely somewhere in Mexico’s Yucatán Peninsula, triggering a mass extinction event. The collision and its after-effects wiped out some 75% of the world’s species. No four-legged animals larger than a bulldog survived, with the exception of a few cold-blooded creatures in the lizard family.

How well our own species survives could be helped by understanding the resilience of ancient lizards and their much hotter world, says Hank Woolley, an Earth sciences PhD student at the USC Dornsife College of Letters, Arts and Sciences and graduate student-in-residence at the Dinosaur Institute at the Natural History Museum of Los Angeles County.

“The only way we can even begin to think about understanding what life will look like in a warmer world, without ice caps, is by looking back in time at the fossil record,” explains Woolley, who is researching why some animals survive mass extinction events better than others and what the world’s biodiversity looked like when global temperatures were higher.

Woolley grew up in Colorado with an early love of all things prehistoric. He was a frequent visitor to the Denver Museum of Nature & Science’s Dinosaur Hall, which walks visitors through 4 billion years of Earth’s history, and an avid fan of the Jurassic Park movies.

He strayed from this early interest in college, majoring in history and French at Bates College, but the detour didn’t last long. He ended up back at the museum with an internship in the paleontology department after graduation. His love for the subject reemerged among the dinosaur teeth and fossilized corals.

“As soon as I started interacting with fossils again, I realized: ‘Oh, this is what I want to do for a career,’” says Woolley. He headed to the University of Colorado Boulder and got another undergraduate degree, this time in geology.

A fortuitous meeting led him to USC: He met Nate Smith, adjunct associate professor (research) of Earth sciences at USC Dornsife, out on a dig. “I told him I was applying to graduate school, and he said that he was taking a student and encouraged me to apply,” says Woolley.

Fast forward a few years and Woolley is now at USC Dornsife, where Smith and David Bottjer, professor of Earth sciences, biological sciences and environmental sciences, are his co-advisers as he researches ancient reptiles and mass extinction events.

Woolley’s work also focuses on understanding where ancient life lived on a once hotter planet. For instance, the area around the equator is now home to fertile zones such as the Amazon rainforest but go back several million years to a warmer climate and things look quite different.

“We always think of today’s equator as this really amazing biodiversity hotspot, but in a hothouse world that might be different,” says Woolley. In an Earth without ice caps, areas like far northern America may have been much more suitable for life than around a blistering equatorial zone.

As the globe heats under climate change, uncovering what areas of the world best host biodiversity during hotter times will be essential to adapting where humans live and grow food.

Woolley’s research often takes him out into the field. He’s been on digs in Madagascar and the Antarctic and recently returned from an expedition north of Moab, Utah, as he works to catalogue the geographic patterns of dinosaurs in North America.

This summer saw him excavating one of his favorite childhood dinosaurs, the stegosaurus, famed for the massive plates that adorned its spine. It was less than ideal conditions for a dig — a heat dome had settled over the area, pushing temperatures up to 115 degrees. The dinosaur required thunderous jackhammers to excavate. Woolley knows it’s all just part of the job, however. Fossil hunting is a lot like the old, gritty days of gold prospecting.

“You often get skunked. You go days and days without finding fossils and then, at 4 p.m. on the last day, you find the great find,” says Woolley. “You’ve got to just stay the course, stay consistent and, of course, eat well. If you’re not finding fossils, you better be at least having some good meals.”

Listen to the record

A fossil record that shows Earth has rebounded from numerous mass extinction events shouldn’t be taken as a sign to trust that Mother Earth has got us covered. This is humanity’s first extinction event, after all.

“We as humans evolved during an ice cap world. Earth has gone through warmer and cooler periods, but this is totally unprecedented in terms of what humans have evolved through and are used to living in,” says Woolley. “While we’re an extremely adaptable species, and we might very well survive this, there’s also untold suffering that will happen if we do nothing about it right now.”

Of course, there are limits to how much power Woolley and his fellow paleontologists have to change our trajectory.

“We’re not solving the Da Vinci code or an age-old mystery of how we save humanity,” says Woolley. “Paleontologists just try to provide contextual data for modern biologists, ecologists and conservationists to help them understand our ecosystems today.”

With a little luck, and with the help of scientists like Woolley, we may fare like the lizard and mark the fossil record for millions of years to come.

Source: Based on the news release from University of South California, written by Margaret Crable