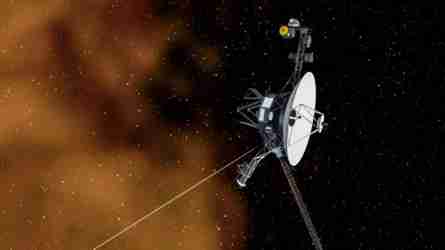 In an artist's depiction, the Voyager 1 craft continues to cruise through interstellar space. NASA/JPL/Provided

Voyager 1 – one of two sibling NASA spacecraft launched 44 years ago and now the most distant human-made object in space – still works and zooms toward infinity. As the craft toils, it has long since zipped past the edge of the solar system through the heliopause – the solar system’s border with interstellar space – into the interstellar medium. Now, its instruments have detected the constant drone of interstellar gas (plasma waves), according to Cornell-led research published May 10 in Nature Astronomy. Examining data slowly sent back from more than 14 billion miles away, Stella Koch Ocker, a Cornell doctoral student in astronomy, has uncovered the emission. “It’s very faint and monotone, because it is in a narrow frequency bandwidth,” Ocker said. “We’re detecting the faint, persistent hum of interstellar gas.” This work allows scientists to understand how the interstellar medium interacts with the solar wind, Ocker said, and how the protective bubble of the solar system’s heliosphere is shaped and modified by the interstellar environment.

Launched in September 1977, the Voyager 1 spacecraft flew by Jupiter in 1979 and then Saturn in late 1980. Travelling at about 38,000 mph, Voyager 1 crossed the heliopause in August 2012. After entering interstellar space, the spacecraft’s Plasma Wave System detected perturbations in the gas. But, in between those eruptions – caused by our own roiling sun – researchers have uncovered a steady, persistent signature produced by the tenuous near-vacuum of space. “The interstellar medium is like a quiet or gentle rain,” said senior author James Cordes, the George Feldstein Professor of Astronomy (A&S). “In the case of a solar outburst, it’s like detecting a lightning burst in a thunderstorm and then it’s back to a gentle rain.”

Ocker believes there is more low-level activity in the interstellar gas than scientists had previously thought, which allows researchers to track the spatial distribution of plasma – that is, when it’s not being perturbed by solar flares. Cornell research scientist Shami Chatterjee explained how continuous tracking of the density of interstellar space is important. “We’ve never had a chance to evaluate it. Now we know we don’t need a fortuitous event related to the sun to measure interstellar plasma”.   “Scientifically, this research is quite a feat. It’s a testament to the amazing Voyager spacecraft,” Ocker said. “It’s the engineering gift to science that keeps on giving.”