Scientists analyzed all 6.7-or-greater magnitude strike-slip earthquakes worldwide since 2000 — there were 87 in all — and identified 12 of the supershear type. 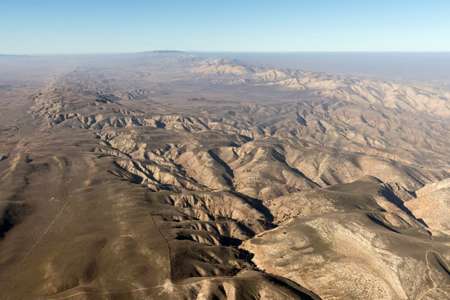 Powerful supershear earthquakes, once considered rare, are much more common than previously thought, according to a study led by UCLA geophysicists and published in Nature Geoscience.

The scientists analyzed all 6.7-or-greater magnitude strike-slip earthquakes worldwide since 2000 — there were 87 in all — and identified 12 of the supershear type, or about 14%. (Four of those earthquakes were previously unreported.)

That percentage is more than double what scientists expected; until now less than 6% of strike-slip earthquakes had been identified as supershear.

Strike-slip earthquakes occur when the edges of two tectonic plates rub sideways against each other. Supershear quakes are a subtype of that group that are caused when faults beneath the surface rupture faster than shear waves — the seismic waves that shake the ground back and forth — can move through rock. The effect corrals energy that is then released violently; the effect can be compared to a sonic boom.

As a result, supershear earthquakes tend to cause more shaking, and are potentially more destructive, than other earthquakes that have the same magnitude.

“When an airplane flies faster than sound can travel through air, a cone of pent-up sound waves forms in front of the plane and when it catches up, we hear it all at once,” said Lingsen Meng, UCLA’s Leon and Joanne V.C. Knopoff Professor of Physics and Geophysics, and the paper’s corresponding author. “Supershear earthquakes are potentially more destructive than other kinds of earthquakes because they are more effective at generating seismic waves, with more shaking, which could cause more damage.”

The research also found that supershear earthquakes occur as commonly beneath the oceans as they do on land, and that they are most likely to occur along strike-slip faults, such as California’s San Andreas Fault.

The findings suggest that disaster planning efforts should take into consideration whether nearby faults are capable of producing supershear earthquakes and, if so, take measures to prepare for a higher level of shaking and potential damage than could be caused by non-supershear earthquakes.

Meng said the reason relatively few supershear earthquakes have been found is that researchers mainly study earthquakes on land.

The scientists used a method called backprojection to determine the direction in which seismic waves arrived to infer how fast an earthquake moves along the fault. The technique applies an algorithm to analyze brief time delays between seismic waves as they’re detected by a group of sensors. The method is similar to how one can locate a person by tracking the signals their smartphone sends to cell towers.

The data revealed supershear earthquakes tend to occur on mature strike-slip faults, in which the edges of two continental plates rub laterally against each other. In a mature fault, that action has been happening for long enough to create a zone of damaged rocks that act like a dam around the fault, slowing or blocking seismic wave propagation and concentrating their energy.

Ampuero said the findings could help scientists better understand what it takes for a fault to produce the kinds of ruptures that lead to supershear earthquakes.

In the past century, at least one large supershear earthquake has occurred in California: In 1979, a 6.5-magnitude quake in Southern California’s Imperial Valley region injured people as far away as Mexico and caused extensive damage to irrigation systems. And, although it predated scientific monitoring, the 1906 earthquake that caused extensive damage in San Francisco likely also fell into the supershear category.

Not all supershear earthquakes are that disastrous. The shape of the fault, the rocks around it, and other factors can affect the propagation of seismic waves and limit the accumulation of energy. Faults that curve tend to slow, deflect or absorb seismic waves, while straight faults let them flow freely.

In a previous study, Meng’s research group identified the catastrophic 7.5 magnitude earthquake that hit the Indonesian island of Sulawesi in 2018 as a supershear event. The temblor and ensuing tsunami killed at least 4,000 people. Despite the curve in the Indonesian earthquake fault, the horrific damage occurred because the fault moved faster than any previously recorded and energy from earlier temblors likely were stored up in the rocks, awaiting a moment to burst, Meng said.

Fortunately, Meng said supershear earthquakes in the ocean are less likely than earthquakes that cause the sea floor to move vertically to produce tsunamis.

The San Andreas Fault, on the other hand, is mostly straight and could experience an even more explosive rupture than the Sulawesi quake.