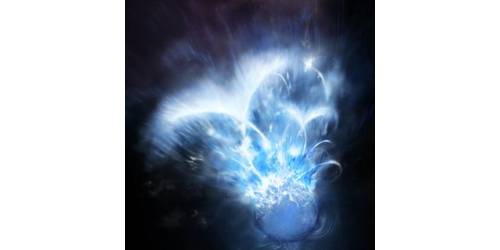 Scientists have found the first clues to understand violent short duration flares from a compact star of rare category called magnetar located thirteen million light years away. These compact stars with the most intense magnetic field known, of which only thirty have been spotted so far in our galaxy, suffer violent eruptions that are still little known due to their unexpected nature and their short duration. Scientists have long been intrigued by such short and intence bursts --- transient X-ray pulses of energies several times that of the Sun and length ranging from a fraction of a few milliseconds to a few microseconds.

When massive stars like supergiant stars with a total mass of between 10 and 25 solar masses collapse, they might form neutron stars. Among neutron stars, stands out a small group with the most intense magnetic field known: magnetars. These objects, of which only thirty are known so far, suffer violent eruptions that are still little known due to their unexpected nature and short duration, of barely tenths of a second.

A scientific group headed by Prof. Alberto J.Castro-Tirado from the Andalusian Institute of Astrophysics (IAA-CSIC) studied an eruption in detail: managing to measure different oscillations, or pulses during the instants of highest energy, which are a crucial component in understanding giant magnetar flares. Dr. Shashi Bhushan Pandey from Aryabhatta Research Institute of Observational Sciences (ARIES), an Institute of the Department of Science and Technology worked closely with Prof. Alberto Castro Tirado and other group members in this research which has been published in the journal Nature. This is the first extragalactic magnetar studied in details.

"Even in an inactive state, magnetars can be many thousands times more luminous than our Sun. But in the case of the flash we have studied, GRB2001415, which occurred on April 15, 2020 and lasted only around one tenth of a second, the energy that was released is equivalent to the energy that our Sun radiates in one hundred thousand (100,000) years. The observations revealed multiple pulses, with a first pulse appearing only about tens of microseconds, much faster than other extreme astrophysical transients," said Alberto J. Castro-Tirado, IAA-CSIC and lead author.

It is believed that eruptions in magnetars may be due to instabilities in their magnetosphere or to a kind of "earthquakes" (”starquakes”) produced in their crust, a rigid and elastic layer about a kilometer thick. “Regardless of the trigger, in the magnetosphere of the star a type of waves will be created. These  waves which are well known in the Sun, are called Alfvén waves and  while bouncing back and forth between the points at the base of its lines of magnetic field, they interact with each other dissipating energy”, points out Castro-Tirado.

The oscillations detected in the eruption are consistent with the emission produced by the interaction between Alfvén waves, whose energy is rapidly absorbed by the crust. Thus, in a few milliseconds the magnetic reconnection process ended and, therefore, also the pulses detected in GRB200415, which disappeared 3.5 milliseconds after the main burst. The analysis of the phenomenon has made it possible to estimate that the volume of the flare was similar or even greater than that of the neutron star itself.

The eruption was detected by the Atmosphere-Space Interactions Monitor (ASIM) instrument, on board the International Space Station. The scientific team was able to solve the temporal structure of the event, by analyzing the minute scale of data for over a year. “Though several papers have been published about the event, as ASIM was the only mission that detected the main burst phase in the entire energy range of photons without saturation, it puts the ASIM instrument in a unique position to unveil some of the secrets surrounding magnetars,” said Nikolai Østgaard from University of Bergen Norway, the second author.

“The detection of the oscillations in GRB 200415 has been a challenge due to the brevity of the signal, whose amplitude decays rapidly and is embedded in the background noise. We therefore owe this achievement to sophisticated data analysis techniques that have been applied independently by individual team members. But it is also undoubtedly a technological achievement due to the excellent quality of the data provided by the ASIM instrument on board the International Space Station", points out Javier Pascual, IAA-CSIC researcher who participated in the work.

“Understanding these oscillations can shed light on the structure of these mysterious objects” states Michael Gabler (University of Valencia, Spain).

These flares had been detected in two of the thirty known magnetars in our galaxy, the Milky Way, but also in two others located in other galaxies. GRB2001415 would be the most distant magnetar eruption captured to date, found in the Sculptor group of galaxies (NGC 253) some thirteen million light years away.

“Detections of giant flares from magnetars are extremely rare.  This eruption has provided a crucial component in understanding how magnetic stresses are produced in and around a neutron star,” concludes Castro-Tirado. “Continuous monitoring of magnetars in nearby galaxies will help to understand this phenomenon, and will also pave the way to learn more about fast radio bursts, today one of the most enigmatic phenomena in astronomy”, said Dr. Shashi Bhushan Pandey, one of the co-authors of this article.