Using powerful tools and techniques developed in the field of structural biology, researchers have discovered new details about the human immunodeficiency virus, HIV. 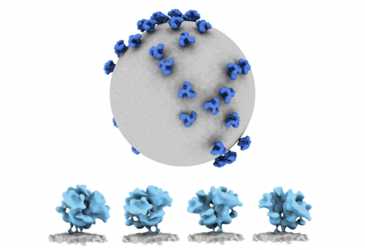 Cryo-electron microscopy was used to gather 3-dimensional images of nearly complete HIV virus particles. The studies provide a detailed portrait of the antigenic face, the Env glycoprotein (blue), that HIV presents to the immune system and revealed new aspects of how it exists on the virus surface.Kelly Lee/Lee Lab at the University of Washington

Using powerful tools and techniques developed in the field of structural biology, researchers at the University of Washington and Scripps Research have discovered new details about the human immunodeficiency virus, HIV. The findings bring into focus the basic architecture of the virus just above and below its surface and may help in the design and development of a vaccine that can protect against AIDS.

These detailed findings include 3D views of the structure and position of the virus’ envelope “spike” proteins (the Env protein, used when the virus binds with cells) in the context of the full virus. Normally, researchers view the protein particles separated from the virus or expressed as engineered or purified proteins. In another key development, the scientists shed new light on the glycan shields — the sugars on the proteins that can hide it from the body’s immune system.

“We’re looking at the whole virus particle and how this protein on the surface relates to the rest of the virus,” said lead author Kelly Lee, associate professor of medicinal chemistry in the UW School of Pharmacy. “And by looking at the intact virus structure, we can see how the different facets of this ‘face of the virus’ are being displayed and how they would be recognized by or hidden from the immune system.”

This intact view of the virus also allowed the scientists to gain new insights into positioning of the envelope spike protein on the surface relative to the internal protein structure, called the Gag lattice.

“This finding overturn previous models of how the parts of the viruses are assembled and helps to focus our attention on where the docking interaction of these two proteins is likely to be,” Lee said. “This interaction needs to be resolved in more detail, but at least the current work gives us the correct architectural model for the virus assembly.”

It was this particular finding that led to the title of the paper — “Cryo-ET of Env on intact HIV virions reveals structural variations and positioning on the Gag lattice” — published Feb. 4 in the journal Cell. Another finding that had not been previously observed, the scientists pointed out, is that the “stalk” supporting the envelope proteins is flexible and can tilt, presenting both opportunity and challenges to the immune system’s neutralizing antibodies that protect cells from infection.

“Structural biology has driven HIV vaccine design, so as we get a better and better picture of what it is we’re targeting, that inspires innovation and may lead to improved vaccines,” said co-corresponding author Michael Zwick, associate professor of immunology and microbiology at Scripps Research.

HIV’s envelope presents a particularly difficult target for vaccine development, Zwick added, because the virus displays so few spikes and camouflages them with sugar molecules so as to evade our immune system.

“All these features increase the dynamic variability that the HIV spike protein presents to the immune system,” said Lee, who also directs a UW lab exploring virus structure and dynamics. “This is something that people in HIV vaccine development have grappled with from the very beginning — this virus mutates and changes itself astronomically and rapidly. Each time it infects an individual, you end up with literally thousands of different variants within that one individual, and if you look across populations, it’s multiplied even more.”

In fact, in February, an even more deadly strain of HIV was found to have been circulating in the Netherlands. Luckily, while the strain is a “highly virulent variant,” it still responds to treatment.

“This is just another reminder that these viruses are always changing, so we need scientists to continue studying them,” Zwick said.

Co-authors are Vidya Mangala Prasad, former acting instructor at UW School of Pharmacy, currently at the Indian Institute of Science; Daniel Leaman, Department of Immunology and Microbiology, The Scripps Research Institute; Klaus Lovendahl, Jacob Croft and Edgar Hodge, Department of Medicinal Chemistry, UW School of Pharmacy; and Mark Benhaim, who worked on the project as a graduate student at UW.

This research was funded by several National Institutes of Health grants, the James B. Pendleton Charitable Trust and a UW Proteomics Resource grant. A grant from the Bill & Melinda Gates Foundation also supported portions of this work.