Research reveals a novel role for how one of these proteins, tau, functions in healthy nerve cells, bringing us closer to understanding how it could be involved in pathology. 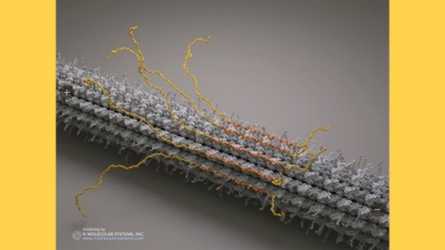 Clumps and tangles of tau protein are associated with Alzheimer's disease and other dementias, but tau protein also plays a role in healthy nerve cells. Healthy tau can assemble into an envelope (orange) on microtubules within a cell. A new UC Davis study shows that this envelope squeezes the microtubule into a more compact form. This changes what other proteins can attach to the microtubule and regulates cell function. Modeling by Molecular Systems Inc.

In Alzheimer’s disease and other neurodegenerative dementias, proteins that normally play a role in healthy brain tissue turn bad, clumping together to form insoluble plaques and tangles as neurons wither and die. Exactly how these proteins are connected to disease — and whether they can be targeted in some way to slow, stop or reverse its progression — remains a challenging problem. New research from the University of California, Davis, reveals a novel role for how one of these proteins, tau, functions in healthy nerve cells, bringing us closer to understanding how it could be involved in pathology. The work was published Aug. 22 in Nature Chemical Biology.

Tau protein is implicated in a wide range of neurodegenerative diseases, said Kassandra Ori-McKenney, associate professor in the UC Davis Department of Molecular and Cellular Biology and a corresponding author on the paper. The brains of people with Alzheimer’s disease contain tangles of tau protein and plaques of another protein, beta amyloid. However, tau protein tangles also occur in a variety of diseases, collectively referred to as “tauopathies,” and other neurodegenerative conditions, including following traumatic brain injury.

It was thought that “healthy” tau exists as single protein molecules, and that tau causes disease when it clumps together with other tau proteins, forming the insoluble tau tangles. But in 2019, Ori-McKenney and Richard McKenney, associate professor in the same department, showed that healthy tau could self-associate and come apart again, revealing that self-association of tau molecules may not necessarily always lead to pathology.

“In its natural form tau can self-assemble and disassemble, so what is the tipping point that produces a form where it can’t disassemble and forms a tangle?” Ori-McKenney said.

Tau is one of a group of proteins found in all kinds of cells, from single cell amoebas to insects to people, that associate with microtubules, large protein filaments that fill the inside of cells. Microtubules provide a framework within the cell that provides structure and organization, as well as allowing items to move around within the cell and for the cell itself to move. For these things to happen, microtubules have to interact with many other proteins.

Their 2019 paper showed that healthy tau molecules could assemble with each other, forming an “envelope” around microtubules, a novel behavior that the authors showed could play a regulatory role by making it harder, or easier, for certain other proteins to attach to the microtubule.

In the new paper, Ori-McKenney, McKenney and collaborators in the Czech Republic carried out a series of experiments with tau proteins and isolated microtubules. They found that not only can tau self-assemble to form an envelope around microtubules, but that when it does so it squeezes the microtubule into a more compact form. It can do this because microtubules are made up of pairs (dimers) of individual tubulin proteins, and there is a little bit of squishiness — about 2 angstroms — between dimers.

This means that tau protein can change the compaction along a length of microtubule, which in turn affects how other proteins attach to it. For example, kinesin-1, a motor protein that can move along microtubules, will attach only to an expanded microtubule.

The team also looked at other proteins that are evolutionarily related to tau, microtubule associated proteins, or MAP, 2 and 4. MAP2, they found, behaves like tau and can compact microtubules but MAP4 does not. These results suggest that tau and MAP2 might have evolved the ability to compact microtubules for specific functions within cells. Interestingly, both proteins are largely found only in the nervous system, while MAP4 is found in most tissues in the body, suggesting the roles of tau and MAP2 in microtubule compaction may be very important in neurons.

Neither MAP2 or MAP4 are known to be associated with disease states. In future work, the researchers hope to figure out the steps between healthy tau self-assembly and pathological irreversible tangles and the roles of these proteins in different organisms.