Researchers have shown that polaritons, the quirky particles that may end up running the quantum supercomputers of the future 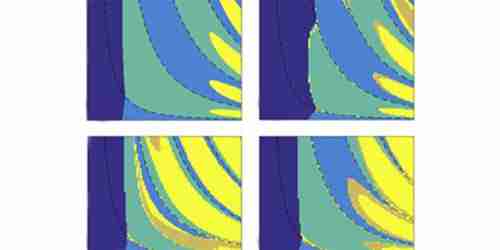 Researchers from the University of Cambridge and Skoltech in Russia have shown that polaritons, the quirky particles that may end up running the quantum supercomputers of the future, can form structures that behave like molecules – and these ‘artificial molecules’ can potentially be engineered on demand. Their results are published in the journal Physical Review B Letters. “We show that clusters of interacting polaritonic and photonic condensates can form a range of exotic and entirely distinct entities – ‘molecules’ – that can be manipulated artificially,” said first author Alexander Johnston, from Cambridge Department of Applied Mathematics and Theoretical Physics. “These artificial molecules possess new energy states, optical properties, and vibrational modes from those of the condensates comprising them.”

Johnston and his colleagues – Kirill Kalinin and Professor Natalia Berloff, noticed some curious asymmetric stationary states in which not all of the condensates have the same density in their ground state. “Upon further investigation, we found that such states came in a wide variety of different forms, which could be controlled by manipulating certain physical parameters of the system,” said Johnston. “This led us to propose such phenomena as artificial polariton molecules and to investigate their potential uses in quantum information systems.” Johnston mentions “We’ve found that there is a wide range of exotic, asymmetric states possible in tetrad configurations. In some of these, all condensates have different densities, despite all of the couplings being of equal strength, inviting an analogy with chemical compounds.”

In specific tetrad structures, each asymmetric dyad can be viewed as an individual ‘spin,’ defined by the orientation of the density asymmetry. This has interesting consequences for the system’s degrees of freedom, or the independent physical parameters required to define states. The spins introduce a separate degree of freedom, in addition to the continuous degrees of freedom given by the condensate phases. The relative orientation of each of the dyads can be controlled by varying the coupling strength between them. Since quantum information sem. “In addition, we have discovered a plethora of exotic asymmetric states in triad and tetrad systems,” said Berloff. “It is possible to seamlessly transition between such states simply by varying the pumping strength used to form the condensates. This property suggests that such states could form the basis of a polaritonic multi-valued logic system, which could enable the development of polaritonic devices that dissipate significantly less power than traditional methods and, potentially, operate orders of magnitude faster.”