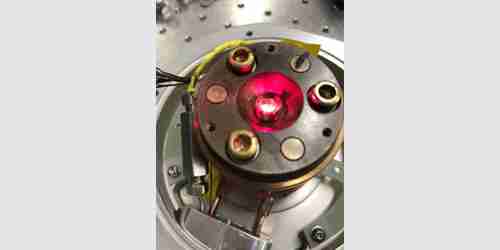 A strong laser is seen illuminating a material in a low-temperature chamber. The laser is being used to change the material's degree of transparency. Credit: Caltech/David Hsieh Laboratory

Imagine windows that can easily transform into mirrors, or super high-speed computers that run not on electrons but light. These are just some of the potential applications that could emerge from optical engineering, the practice of using lasers to rapidly and temporarily change the properties of materials.

"These tools could let you transform the electronic properties of materials at the flick of a light switch," says Caltech Professor of Physics David Hsieh. "But the technologies have been limited by the problem of the lasers creating too much heat in the materials."

In a new study in Nature, Hsieh and his team, including lead author and graduate student Junyi Shan, report success at using lasers to dramatically sculpt the properties of materials without the production of any excess damaging heat.

The team found a "sweet spot" to get around this, Shan says, where the frequency of the laser is fine-tuned in such a way to markedly change the material's properties without imparting any unwanted heat.

The scientists also say they found an ideal material to demonstrate this method. The material, a semiconductor called manganese phosphorus trisulphide, naturally absorbs only a small amount of light over a broad range of infrared frequencies. For their experiments, Hsieh, Shan, and colleagues used intense infrared laser pulses, each lasting about 10-13 seconds, to rapidly change the energy of electrons inside the material. As a result, the material shifted from a highly opaque state to a highly transparent one for certain colors of light.

Even more critical, the researchers say, is that the process is reversible. When the laser turns off, the material instantly goes back to its original state completely unscathed. This would not be possible if the material had absorbed the laser light and heated up because it would take a long time for the material to dissipate the heat. The heat-free manipulation used in the new process is known as "coherent optical engineering."

The method works because the light alters the differences between the energy levels of electrons in the semiconductor (called band gaps) without kicking the electrons themselves into different energy levels, which is what generates heat.

"It's as if you have a boat, and then a big wave comes along and vigorously rocks the boat up and down without causing any of the passengers to fall down," explains Hsieh. "Our laser is vigorously rocking the energy levels of the material, and that alters the materials' properties, but the electrons stay put."

Researchers have previously theorized how this method would work. For example, in the 1960s, Caltech alumnus Jon H. Shirley (PhD '63), put forth mathematical ideas about how to solve for electron-energy levels in a material in the presence of light. Building on this work, Hsieh's Caltech team collaborated with theorists Mengxing Ye and Leon Balents from UC Santa Barbara to calculate the expected effects of laser illumination in manganese phosphorus trisulphide. The theory matched the experiments with "remarkable" accuracy, says Hsieh.

The findings, Hsieh says, mean that other researchers can now potentially use light to artificially create materials, such as exotic quantum magnets, which would have been otherwise difficult or even impossible to create naturally.

"In principle, this method can change optical, magnetic, and many other properties of materials," says Shan. "This is an alternative way of doing materials science. Rather than making new materials to realize different properties, we can take just one material and ultimately give it a broad range of useful properties."

The study, titled, "Giant modulation of optical nonlinearity by Floquet engineering," was funded by the Army Research Office; the David and Lucile Packard Foundation; the National Science Foundation via the Institute for Quantum Information and Matter at Caltech and via UC Santa Barbara; the Gordon and Betty Moore Foundation; and the National Research Foundation of Korea. Other authors include Hao Chu (PhD '17), as well as Sungmin Lee and Je-Geun Park of Seoul National University.