To prevent the next pandemic, restore wildlife habitats

Preserving and restoring natural habitats could prevent pathogens that originate in wildlife from spilling over into domesticated animals and humans. 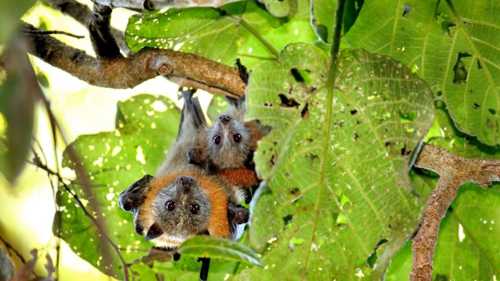 Preserving and restoring natural habitats could prevent pathogens that originate in wildlife from spilling over into domesticated animals and humans, according to two new companion studies.

The research, based in Australia, found that when bats experience loss of winter habitat and food shortages in their natural settings, their populations splinter and they excrete more virus. When populations break up, bats move near humans to agricultural and urban areas.

One of the papers, “Pathogen Spillover Driven by Rapid Changes in Bat Ecology,” which published Nov. 16 in Nature, combines multiple datasets over 25 years. The data includes information on bat behavior, distributions, reproduction and food availability, along with records of climate, habitat loss and environmental conditions. The study predicts when Hendra virus – an often fatal illness in humans – spills over from fruit bats to horses and then people.

The researchers found – strikingly – that in years when food was abundant in their natural habitats during winter months, bats emptied out of agricultural areas to feed in native forests, and away from human communities.

While previous research has shown correlations between habitat loss and occurrence of pathogen spillover, these studies together reveal for the first time a mechanism for such events and provide a method to predict and prevent them.

SARS-CoV-2, SARS-CoV-1, Nipah, Hendra and possibly Ebola are all examples of viruses that fatally spill from bats to humans, sometimes after transmission through an intermediate host. In humans, Hendra virus has a 57% fatality rate, and Nipah virus can be up to 100% fatal, though transmission in humans is inefficient.

“Right now, the world is focused on how we can stop the next pandemic,” said Raina Plowright, professor in the Department of Public and Ecosystem Health in the College of Veterinary Medicine, and senior author of both studies. “Unfortunately, preserving or restoring nature is rarely part of the discussion. We’re hoping that this paper will bring prevention and nature-based solutions to the forefront of the conversation.”

Plowright and colleagues are investigating whether the basic mechanisms found in this study apply to other examples of pathogen spillover from wildlife to humans.

For the studies, the researchers developed datasets from 1996 to 2020 in subtropical Australia that described the locations and sizes of fruit bat populations, the landscapes where they foraged, climate and El Niño events, years when there were food shortages, bat reproductive rates, records of bat intakes into rehabilitation facilities, habitat loss in forests that provide nectar in winter, and years when flowering in existing winter forests occurred.

The scientists then created computer models (called Bayesian network models) to analyze the data, and they discovered two factors driving spillover: habitat loss pushing animals into agricultural areas and climate-induced food shortages. In years following an El Niño event (high temperatures in the Pacific Ocean), trees that bats depend on for nectar failed to produce flowers, leading to a food shortage. Human destruction of forest habitat for farmland and urban development has left few forests that produce nectar for bats in winter.

Due to food scarcity, large populations of bats split into smaller groups and moved to agricultural and urban areas, where weedy species and fig, mango and shade trees offered shelter and reliable but less nutritious food sources than nectar.

When stressed from lack of food, few bats successfully reared their young. According to the Ecology Letters paper, they also shed virus, possibly because they needed to conserve energy by directing it away from their immune systems. Also, the bats that had moved to novel winter habitats, such as agricultural areas, shed more virus than bats in traditional winter habitats.

In agricultural areas, pathogens may spread when urine and feces drop to the ground where horses are grazing, leading to Hendra virus infections. Horses act as an intermediary and occasionally spread the virus to people.

To their surprise, Plowright and colleagues discovered that when remaining stands of eucalyptus trees bloomed in winter, large numbers of bats flocked to these areas. During those flowering events, pathogen spillover completely ceased.

“We put these data into the network models and found that we could predict spillover clusters based on climate, the availability of food, and the location of bats,” said Plowright, who is also a Cornell Atkinson Scholar and was hired this year as part of the provost’s Sustainability Radical Collaboration­ initiative. “We show that when remaining habitat produces food, spillover stops, and therefore a sustainable way to stop these events could be to preserve and restore critical habitat.”

Since 2003, researchers have noticed a gradual dwindling of large nomadic roosts in favor of many smaller roosts in agricultural and urban areas, a five-fold increase over the study period. Bats are less frequently returning in large numbers to their shrinking native habitats. This could be because forests that provide nectar in winter have been extensively cleared.