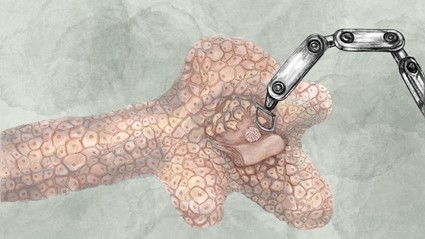 Have you ever wondered how a sphere of cells, morula, gives rise to tissues and organs with mesmerizing shapes and architectures? The secret lies in the mechanics of embryonic tissues. They exhibit a viscous (fluid-like) and an elastic (solid-like) behavior depending on the forces acting on them. At EPFL, Erik Mailand, a PhD student, and Selman Sakar, an assistant professor of mechanical engineering, have decided to harness the mechanoresponsive rheology of cell clusters for engineering tissues with long-lasting complex morphologies.

Bioengineers have long been studying animal tissues with the goal of being able to engineer replicas for regenerative medicine and drug screening. Although there are manufacturing techniques that temporarily recapitulate the form and structure of native tissues, the prescribed morphologies are not stable. Cells continuously apply forces to arrange themselves and the surrounding scaffold into an energetically favorable state, and their physical activities almost always disrupt order. “We want to provide the cells the right mechanical cues so that their desired state coincides with our blueprint for the tissue,” says Sakar, the head of EPFL’s MicroBioRobotic Systems (MICROBS) Laboratory. “We repeatedly observed that cells are inclined to collapse the tissue into a ball due to the emergence of surface stresses.” Sakar’s research group therefore studied the behavior of both individual cells and microfabricated tissues in order to better understand physical principles of self-organization. Their findings have been recently published in two separate articles in Advanced Materials.

The engineers first performed robotic micromanipulation experiments to see how cells respond to forces within a fibrous matrix. To this end, they developed a remotely controlled cell-sized magnetic microactuator that can be operated within tissues. “This platform allows us to discover the loading conditions that would change the organization of cells. These experiments are also important to understand the onset of diseases such as fibrosis and cancer,” says Sakar. The engineers created a one to one digital replica of the experimental system to quantify the mechanical stresses generated by the microactuator. “We used the digital twin to virtually test different mechanical actuation schemes and design experiments that would reveal novel insights,” says Fazil Uslu, the lead author of the first article.

Having learned from the early experiments, the engineers focused their attention on controlling surface stresses. Epithelia are robust tissues that support the structure of the embryos and organs and serve as barriers against pathogens. Notably, epithelia can become elastic, plastic, and viscous by actively remodeling cell-cell junctions and modulating the distribution of local stresses. “We used microfabrication, computational mechanics, light-sheet microscopy, and a novel robotic micromanipulation platform to show that collagen gels covered with a contiguous epithelial sheet can be freely shaped using mechanical forces” says Mailand, the lead author of the second article. The process involves reversible solid to fluid transitions in the epithelial sheet, and is amenable to both additive and subtractive manufacturing techniques. The engineers demonstrated the robustness and versatility of their strategy by guiding the self-assembly of a variety of molded, carved, and assembled tissues from the base material.

This discovery opens up new avenues of research in tissue engineering with the hope that one day tissues developed in the lab will have the proper form and function to be implanted into a patient or used for testing therapies. The discovery may also provide a solution to the problem of tissue vascularization. As the size of the engineered tissues get larger, the cells residing in the core no longer have access to the surrounding medium and require – as our organs do – blood vessels for perfusion. “Our findings indicate that it could be possible to carve tunnels directly into a tissue that would eventually be stabilized by the surrounding cells to artificially create fluidic networks.” Sakar says. Showing that endothelial cells show similar mechanoresponsive characteristics as epithelial cells is the next goal of the project.