A futuristic scientific field is working on tiny motors that could power a network of nanomachines and replace some of the power sources we use in devices today. 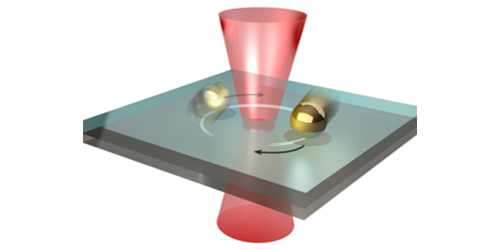 Motors are everywhere in our day-to-day lives — from cars to washing machines. A futuristic scientific field is working on tiny motors that could power a network of nanomachines and replace some of the power sources we use in devices today.

In new research published recently in ACS Nano, researchers from the Cockrell School of Engineering at The University of Texas at Austin created the first ever solid-state optical nanomotor. All previous versions of these light-driven motors reside in a solution of some sort, which held back their potential for most real-world applications.

"Life started in the water and eventually moved on land," said Yuebing Zheng, an associate professor in the Walker Department of Mechanical Engineering. "We've made these micro nanomotors that have always lived in solution work on land, in a solid state."

The researchers envision these motors powering a variety of things. The spinning motion could pick up dust and other particles, making it useful for air quality measurement. They could propel drug delivery devices in the human body. And they could power tiny drones for surveillance and measurements, as well as other mini vehicles.

The new motor is less than 100 nanometers wide, and it can rotate on a solid substrate under light illumination. It can serve as a fuel-free and gear-free engine to convert light into mechanical energy for various solid-state micro-/nano-electro-mechanical systems.

Bringing these nanomotors on land and out of water, so to speak, avoids Brownian Motion, one of the biggest hurdles holding back implementation of these devices. It happens when water molecules push these little motors off their spin. The smaller the motor, the stronger this motion becomes. Removing the solution from the equation side steps this problem entirely.

Nanomotors are part of a large and growing field of miniature power sources. They serve as a middle ground in scale between molecular machines at the smaller end and micro-engines at the larger end.

The field is of immense interest, but at this point, researchers are still trying to figure out the fundamental science to make these tiny motors more viable through increased efficiency.

The reason scientists are so enamored with creating these tiny motors is because they mimic some of the most important biological structures. In nature, these motors drive the division of cells and help them move. They combine to help organisms move.

“Nanomotors help us to precisely control the nanoworld and make up new things we want for our real world.” said Jingang Li, a PhD graduate from Zheng’s group and the lead author of this study.

By taking these motors out of the solution and putting them onto chips, they have the potential to replace batteries in some instances, using only light to generate mechanical motion and power devices.

This breakthrough arises from a novel design: a thin layer of phase change material on the substrate. The thin film can undergo a local and reversible change from the solid to a quasi-liquid phase when exposed to light. This phase change can reduce the friction force of the nanomotors and drives the rotation.

This was the team's first demonstration of the motors using nanoparticles. Going forward, the researchers will continue to improve their creation, working on enhancing performance, by making them more stable and controllable, which leads to converting light to mechanical energy at higher rates.

Other team members include from mechanical engineering Pavana Siddhartha Kollipara and Kan Yao; Yaoran Liu from the Department of Electrical and Computer Engineering and Ya Liu from Xi’an Jiaotong University in China.