University of Chicago study finds way that hot, rocky planets in other systems could form and keep atmospheres 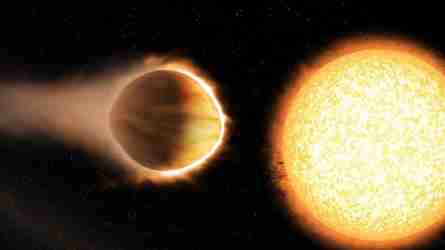 A study suggests that exoplanets close to their stars may actually retain a thick atmosphere full of water. Above, an artist's illustration of the exoplanet WASP-121b, which appears to have water in its atmosphere. Image courtesy of Engine House VFX, At-Bristol Science Centre, University of Exeter

University of Chicago study finds way that hot, rocky planets in other systems could form and keep atmospheres

An atmosphere is what makes life on Earth’s surface possible, regulating our climate and sheltering us from damaging cosmic rays. But although telescopes have counted a growing number of rocky planets, scientists had thought most of their atmospheres long lost.

However, a new study by University of Chicago and Stanford University researchers suggests a mechanism whereby these planets could not only develop atmospheres full of water vapor, but keep them for long stretches. Published March 15 in the Astrophysical Journal Letters, the research expands our picture of planetary formation and could help direct the search for habitable worlds in other star systems.

“Our model is saying that these hot, rocky exoplanets should have a water-dominated atmosphere at some stage, and for some planets, it may be quite a long time,” said Asst. Prof. Edwin Kite, an expert in how planetary atmospheres evolve over time.

As telescopes document more and more exoplanets, scientists are trying to figure out what they might look like. Generally, telescopes can tell you about an exoplanet’s physical size, its proximity to its star and if you’re lucky, how much mass it has. To go much further, scientists have to extrapolate based on what we know about Earth and the other planets in our own solar system. But the most abundant planets don’t seem to be similar to the ones we see around us.

“What we already knew from the Kepler mission is that planets a little smaller than Neptune are really abundant, which was a surprise because there are none in our solar system,” Kite said. “We don’t know for sure what they are made of, but there’s strong evidence they are magma balls cloaked in a hydrogen atmosphere.”

There’s also a healthy number of smaller rocky planets that are similar, but without the hydrogen cloaks. So scientists surmised that many planets probably start out like those larger planets that have atmospheres made out of hydrogen, but lose their atmospheres when the nearby star ignites and blows away the hydrogen.

But lots of details remain to be filled out in those models. Kite and co-author Laura Schaefer of Stanford University began to explore some of the potential consequences of having a planet covered in oceans of melted rock.

“Liquid magma is actually quite runny,” Kite said, so it also turns over vigorously, just like oceans on Earth do. There’s a good chance these magma oceans are sucking hydrogen out of the atmosphere and reacting to form water. Some of that water escapes to the atmosphere, but much more gets slurped up into the magma.

Then, after the nearby star strips away the hydrogen atmosphere, the water gets pulled out into the atmosphere instead in the form of water vapor. Eventually, the planet is left with a water-dominated atmosphere.

This stage could persist on some planets for billions of years, Kite said.

There are several ways to test this hypothesis. The James Webb Space Telescope, the powerful successor to the Hubble Telescope, is scheduled to launch later this year; it will be able to conduct measurements of the composition of an exoplanet’s atmosphere. If it detects planets with water in their atmospheres, that would be one signal.

Another way to test is to look for indirect signs of atmospheres. Most of these planets are tidally locked; unlike Earth, they don’t spin as they move around their sun, so one side is always hot and the other cold.

A pair of UChicago alumni have suggested a way to use this phenomenon to check for an atmosphere. Scientists Laura Kreidberg, PhD’16, and Daniel Koll, PhD’16—now at the Max Planck Institute for Astronomy and MIT, respectively—pointed out that an atmosphere would moderate the temperature for the planet, so there wouldn’t be a sharp difference between the day sides and night sides. If a telescope can measure how strongly the day side glows, it should be able to tell whether there’s an atmosphere redistributing heat.

(Source:  Based on University of Chicago news release originally written by Louise Lerner)