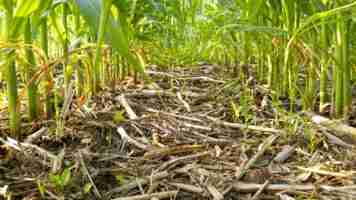 Bacteria convert plant biomass, such as this corn organic matter, into soil, which adds to soil fertility and stores carbon in the ground. Dan Buckley/Provided

Cornell researchers have developed an innovative technique to track microbes and understand the various ways they process soil carbon, findings that add to our knowledge of how bacteria contribute to the global carbon cycle.

That’s important because soil bacteria are notorously difficult to study, though they are a key to the health of our biosphere. They convert plant biomass into soil organic matter, which is the basis for soil fertility and which holds three times more carbon than the atmosphere. In this way, bacteria control how much carbon ends up in the atmosphere or stored in soil and every year soil microbes process about six times more carbon than all anthropogenic emissions combined.

The paper, “Multi-Substrate DNA Stable Isotope Probing Reveals Guild Structure of Bacteria that Mediate Soil Carbon Cycling,” published Nov. 19 in the Proceedings of the National Academy of Sciences, provides clues to how soil organic matter is formed and lost by revealing the different strategies microbes use for processing carbon from plants.

“We want to use this information to study the organisms themselves to get a better understanding of what they are doing and why they are doing it,” said Daniel Buckley, professor in the School of Integrative Plant Science Soil and Crop Sciences Section in the College of Agriculture and Life Sciences.

Samuel Barnett, a doctoral student in Buckley’s lab, is the paper’s first author.

One of the biggest uncertainties in computer models that predict the carbon cycle and climate change is that so little is understood about how soil bacteria operate and influence carbon in the soil, Buckley said.

“By understanding what the microbes are doing, we hope to make better predictions about what’s going to happen in the carbon cycle in the future and then make better decisions about how to manage our soil,” he said.

Soil microbes are tiny and are very hard to observe in the ground, so scientists don’t know enough about their needs to grow them in the lab, which in turn makes them almost impossible to study.

In the paper, Buckley and colleagues used stable isotopes and high throughput DNA sequencing to identify different species of bacteria and to track how each species consumes carbon over time.

“This approach allows us to identify the isotopically labeled DNA and figure out which microbe ate each different type of carbon,” Buckley said. He likened the approach to marking dollar bills, releasing them in a city, and then tracking them as they moved through the economy.

They found that microbes have different strategies for assimilating carbon. Microbes that grow, eat and die rapidly feed on plant matter with easily accessible carbon, such as sugars. Meanwhile, other bacteria specialize in carbon that is harder to break down and absorb. These microbes grow and consume materials more slowly and are more specialized and efficient. In the study, the researchers categorized these types of bacteria into guilds, which are groups of organisms that are all accessing food – or carbon, in this case – in the same way.

“The more we understand, the better we can predict what’s happening with carbon in the soil,” Buckley said.

In future work, the team is also investigating whether some guilds prefer different habitats, such as forests or farm fields, and the effects of soil pH on microbial communities.