New research identifies specific molecules that mediate transport of lipids inside a cell and to the bloodstream. 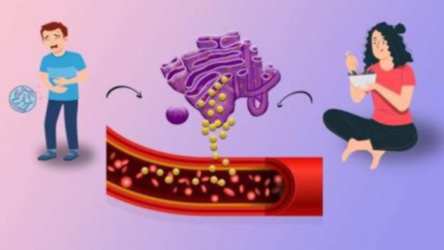 A typical cell in the human body is filled with a fluid called cytoplasm and has a nucleus and several other organelles. Suspended inside the cytoplasm are lipid droplets—vesicles or sacs made of lipid molecules, just like oil droplets. Another organelle, the endoplasmic reticulum (ER), is an interconnected web of tubular network surrounding the cell’s nucleus.

A team of researchers from the Indian Institute of Technology Bombay, Mumbai (IIT Bombay) and Tata Institute of Fundamental Research, Mumbai, have observed that lipid droplets fuse with or attach to the ER inside the cells of the liver after an animal consumes food, and also during bacterial infection. This study, published in the Proceedings of National Academy of Sciences, identifies the molecules that mediate this contact. These findings could help further studies directed at reducing lipid levels in the blood, a topic of interest because excess lipids can cause obesity, diabetes and cardiac problems.

How is the lipid, hidden away inside lipid droplets, released into the blood from the liver? After one consumes food, glucose levels in the blood rise, thus boosting insulin production. Insulin activates a protein called Kinesin to bind to lipid droplets. Kinesin acts as a railway engine and chugs the lipid droplets to the vicinity of the ER on molecular tracks made of protein filaments.

The lipid droplet then delivers its load of lipids to the ER and can, in turn, also receive a cargo of antibacterial proteins from the ER.

Though it was known from the work of the same researchers how the lipid droplets commute towards the endoplasmic reticulum, the conditions under which they fuse with ER and the molecular players that facilitate this fusion were not known. Here the researchers focused on the events after the lipid droplet had entered the vicinity of the ER. It is challenging to observe such phenomena inside most tissues, including the liver. To mimic natural conditions, the researchers used fragments of the ER from the liver of rats. They deposited the ER fragments on a microscope slide in the form of a membrane that mimics the ER and was named as the microsomal supported lipid bilayer (mSLB). The team also isolated lipid droplets from the same liver cells and used them to study lipid droplet binding to the mSLB. Only 20% of lipid droplets bound to the mSLB when the samples were from the liver of a fasted rat, whereas 80% of lipid droplets bound in the case of fed rats.

In the fasting condition, the lipid droplets pile up inside the liver cells as much as ten times the normal level, which avoids dumping all these lipids into the ER, which otherwise would eventually reach the bloodstream. “The consequence could be disastrous if these toxic lipids were to collect inside the heart tissue from the bloodstream every time we fast,” says Prof. Roop Mallik, who led the research.

In a second experiment, they injected a molecule called Lipopolysaccharide into the rat to simulate bacterial infection and to activate the immune system. Again, they found that immune activation drastically increased the binding of lipid droplets to the mSLB (from 20% to 70%). The ER is the factory inside cells where proteins are made. “It is likely that interaction with the ER is needed for lipid droplets to acquire antibacterial proteins that were synthesised on the ER, and then the lipid droplets use these proteins to kill bacteria,” says Prof Mallik.

When binding between cell organelles goes wrong, it may lead to diseases such as Alzheimer’s and Parkinson’s. The researchers hope that the understanding gained in their study about the binding mechanism between lipid droplets and ER could help understand such diseases. It may be possible to interfere with the binding of lipid droplets too. The researchers are currently working to block the binding of Kinesin to lipid droplets inside the liver. However, the constraint is that it has to be done in a way without affecting Kinesin binding to other organelles (non-lipid droplets). If this is successful, lipid delivery to the ER and then onto the bloodstream can be reduced. “We want to test if such interventions can benefit patients with high levels of lipids in their blood (serum triglycerides), who are susceptible to heart attack,” says Prof Mallik highlighting the direction this study can provide.