The chaotic early phase of the solar system 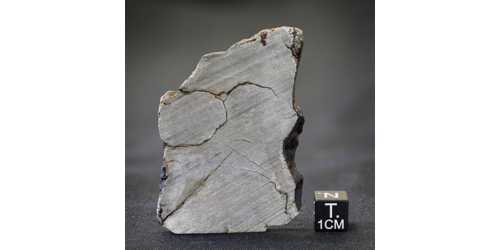 One of the iron meteorites samples the team analysed.  (Photograph: Aurelia Meister)

An international team of researchers led by the ETH Zurich and the National Centre of Competence in Research PlanetS have reconstructed the early history of several asteroids more precisely than ever before. Their results indicate that the early solar system was more chaotic than previously thought.

Before the Earth and other planets formed, the young sun was still surrounded by cosmic gas and dust. Over the millennia, rock fragments of various sizes formed from the dust. Many of these became building blocks for the later planets. Others did not become part of a planet and still orbit the sun today, for example as asteroids in the asteroid belt.

Researchers from ETH Zurich and the National Centre of Competence in Research (NCCR) PlanetS, in collaboration with an international team, analysed iron samples from the cores of such asteroids that landed on Earth as meteorites. In doing so, they unravelled part of their early history during the time when planets formed. Their findings were published in the journal Nature Astronomy.

Witnesses of the early solar system

“Previous scientific studies showed that asteroids in the solar system have remained relatively unchanged since their formation, billions of years ago”, study lead-​author and researcher at the ETH Zurich and the NCCR PlanetS, Alison Hunt explains. “They therefore are an archive, in which the conditions of the early solar system are preserved”, Hunt says.

But to unlock this archive, the researchers had to thoroughly prepare and examine the extra-​terrestrial material. The team took samples from 18 different iron meteorites, which were once part of the metallic cores of asteroids. To carry out their analysis, they had to dissolve the samples to be able to isolate the elements Palladium, Silver and Platinum for their detailed analysis. With the help of a mass spectrometer, they measured abundances of different isotopes of these elements. Isotopes are distinct atoms of given elements, in this case Palladium, Silver and Platinum, which all share the same number of protons in their nuclei but vary in the number of neutrons.

In the first few million years of our solar system, the metallic asteroid cores were heated by radioactive decay of isotopes. As they began to cool down, a specific Silver isotope produced by radioactive decay began to accumulate. By measuring the present-​day Silver isotope ratios within the iron meteorites, the researchers could determine both when and how quickly the asteroid cores had cooled.

The results showed that the cooling was rapid and likely occurred due to severe collisions into other bodies, which broke off the insulating rocky mantle of the asteroids and exposed their metal cores to the cold of space. While the fast cooling had been indicated by previous studies based on Silver isotope measurements, the timing had remained unclear.

“Our additional measurements of Platinum isotope abundances allowed us to correct the Silver isotope measurements for distortions caused by cosmic irradiation of the samples in space. So we were able to date the timing of the collisions more precisely than ever before”, Hunt reports. “And to our surprise, all the asteroidal cores we examined had been exposed almost simultaneously, within a timeframe of 7.8 to 11.7 million years after the formation of the solar system”, the researcher says.

The near simultaneous collisions of the different asteroids indicated to the team that this period must have been a very unsettled phase of the solar system. “Everything seems to have been smashing together at that time”, Hunt says. “And we wanted to know why”, she adds.

From the laboratory to the solar nebula

The team considered different causes by combining their results with those from the latest, most sophisticated computer simulations of the solar system development. Together, these sources could narrow down the possible explanations.

“The theory that best explained this energetic early phase of the solar system indicated that it was caused primarily by the dissipation of the so-​called solar nebula”, study co-​author, NCCR PlanetS member and Professor of Cosmochemistry at the ETH Zurich, Maria Schönbächler explains. “This solar nebula is the remainder of gas that was left over from the cosmic cloud out of which the Sun was born. For a few million years, it still orbited the young Sun until it was blown away by solar winds and radiation”, Schönbächler says

While the nebula was still around, it slowed down the objects orbiting the Sun in it – similar to how air resistance slows a moving car. After the nebula had disappeared, so the researchers suggest, the lack of gas drag allowed the asteroids to accelerate and collide into each other – like bumper cars that were turned to turbo-​mode.

“Our work illustrates how improvements in laboratory measurement techniques allow us to infer key processes that took place in the early solar system – like the likely time by which the solar nebula had gone. Planets like the Earth were still in the process of being born at that time. Ultimately, this can help us to better understand how our own planets were born, but also give us insights into others outside our solar system”, Schönbächler concludes.