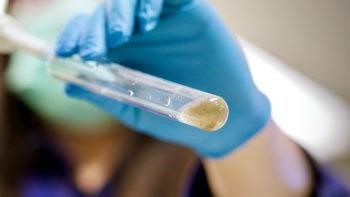 The United States generates seven million tons of sewage sludge annually, enough to fill 2,500 Olympic-sized swimming pools. While a portion of this waste is repurposed for manure and other land applications, a substantial amount is still disposed of in landfills. In a new study, Texas A&M University researchers have uncovered an efficient way to use leftover sludge to make biodegradable plastics.

In the September issue of the journal American Chemical Society (ACS) Omega, the researchers report that the bacterium Zobellella denitrificans ZD1, found in mangroves, can consume sludge and wastewater to produce polyhydroxybutyrate, a type of biopolymer that can be used in lieu of petroleum-based plastics. In addition to reducing the burden on landfills and the environment, the researchers said Zobellella denitrificans ZD1 offers a way to cut down upstream costs for bioplastics manufacturing, a step toward making them more competitively priced against regular plastics.

“The price of raw materials to cultivate biopolymer-producing bacteria accounts for 25-45% of the total production cost of manufacturing bioplastics. Certainly, this cost can be greatly reduced if we can tap into an alternate resource that is cheaper and readily obtainable,” said Kung-Hui (Bella) Chu, professor in the Zachry Department of Civil and Environmental Engineering. “We have demonstrated a potential way to use municipal wastewater-activated sludge and agri- and aqua-culture industrial wastewater to make biodegradable plastics. Furthermore, the bacterial strain does not require elaborate sterilization processes to prevent contamination from other microbes, further cutting down operating and production costs of bioplastics.”

Polyhydroxybutyrate, an emerging class of bioplastics, is produced by several bacterial species when they experience an imbalance of nutrients in their environment. This polymer acts as the bacteria’s supplemental energy reserves, similar to fat deposits in animals. In particular, an abundance of carbon sources and a depletion of either nitrogen, phosphorous or oxygen, cause bacteria to erratically consume their carbon sources and produce polyhydroxybutyrate as a stress response.

“There is a multitude of bacterial species that make polyhydroxybutyrate, but only a few that can survive in high-salt environments and even fewer among those strains can produce polyhydroxybutyrate from pure glycerol,” Chu said. “We looked at the possibility of whether these salt-tolerating strains can also grow on crude glycerol and wastewater.”

For their study, Chu and her team chose the Zobellella denitrificans ZD1, whose natural habitat is the salt waters of mangroves. They then tested the growth and the ability of this bacteria to produce polyhydroxybutyrate in pure glycerol. The researchers also repeated the same experiments with other bacterial strains that are known producers of polyhydroxybutyrate. They found that Zobellella denitrificans DZ1 was able to thrive in pure glycerol and produced the maximum amount of polyhydroxybutyrate in proportion to its weight without water.

Next, the team tested the growth and ability of Zobellella denitrificans ZD1 to produce polyhydroxybutyrate in glycerol containing salt and fatty acids. They found that even in these conditions, it produced polyhydroxybutyrate efficiently, even under balanced nutrient conditions. When they repeated the experiments in samples of high-strength synthetic wastewater and wastewater-activated sludge, they found the bacteria was still able to make polyhydroxybutyrate, although at quantities lower than if they were in crude glycerol.

Chu noted that by leveraging Zobellella denitrificans ZD1 tolerance for salty environments, expensive sterilization processes that are normally needed when working with other strains of bacteria could be avoided.

“Zobellella denitrificans ZD1 natural preference for salinity is fantastic because we can, if needed, tweak the chemical composition of the waste by just adding common salts. This environment would be toxic for other strains of bacteria,” she said. “So, we are offering a low cost, a sustainable method to make bioplastics and another way to repurpose biowastes that are costly to dispose of.”

Other contributors to this research include Fahad Asiri, Chih-Hung Chen, Myung Hwangbo and Yiru Shao from the civil and environmental engineering department at Texas A&M.

This research is supported by the Kuwait Institute for Scientific Research, the Ministry of Higher Education of Kuwait Fellowship and the fellowship from the Ministry of Science and Technology of Taiwan.