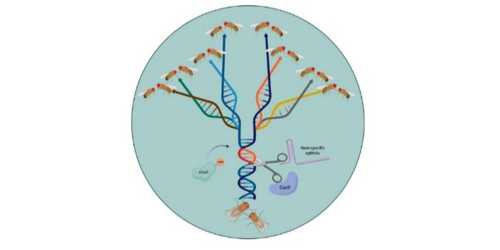 Scientists at the University of California San Diego and their colleagues have developed a gene drive with a built-in genetic barrier that is designed to keep the drive under control. Led by molecular geneticist Omar Akbari’s lab, the researchers engineered synthetic fly species that, upon release in sufficient numbers, act as gene drives that can spread locally and be reversed if desired. The scientists describe their SPECIES (Synthetic Postzygotic barriers Exploiting CRISPR-based Incompatibilities for Engineering Species) development as a proof-of-concept innovation that could be portable to other species such as insect disease vectors. Spreading gene drives that limit pests that feast on valuable food crops is another example of a potential SPECIES application. “Gene drives can potentially spread beyond intended borders and be hard to control. SPECIES offers a way to control populations in a very safe and reversible manner,” said Akbari, a UC San Diego Division of Biological Sciences associate professor and senior author of the paper, which is published June 2 in the journal Nature Communications.

The idea behind the creation of SPECIES is reflective of the formation of new species in nature. As members of a single species separate over time, due to, for example, a new land formation, earthquake separation or other geological event, a new species eventually can evolve from the physical disconnection. If the new species eventually returns to mate with the original species, they could produce unviable offspring due to biological changes following the separation through a natural phenomenon known as reproductive isolation.

Working in the fly species Drosophila melanogaster, UC San Diego researchers and their colleagues at the California Institute of Technology, UC Berkeley and the Innovative Genomics Institute used CRISPR genetic-editing technologies to develop flies encoding SPECIES systems that are reproductively incompatible with wild versions of D. melanogaster. “Even though speciation happens consistently in nature, creating a new artificial species is actually a pretty big bioengineering challenge,” said Anna Buchman, the lead author of the paper. “The beauty of the SPECIES approach is that it simplifies the process, giving us a defined set of tools, we need in any organism to elegantly bring about speciation.” Conceptually, when SPECIES are deployed in the wild in sufficient numbers, they can controllably drive through a population and replace all of their wild counterparts as they spread. Using malaria as an example, SPECIES mosquitoes could be developed with a genetic element that makes them incapable of transmitting malaria.