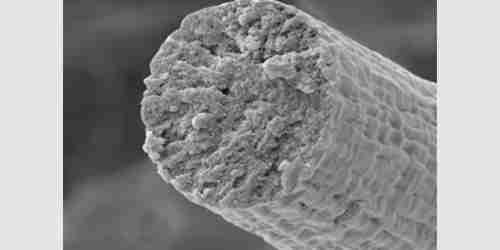 Researchers at the McKelvey School of Engineering at Washington University in St. Louis have developed a synthetic chemistry approach to polymerize proteins inside of engineered microbes. This enabled the microbes to produce the high molecular weight muscle protein, titin, which was then spun into fibers. Their research was published Aug. 30 in the journal Nature Communications. “Its production can be cheap and scalable. It may enable many applications that people had previously thought about, but with natural muscle fibers,” said Fuzhong Zhang, professor in the Department of Energy, Environmental & Chemical Engineering. Now, these applications may come to fruition without the need for actual animal tissues.

The synthetic muscle protein produced in Zhang’s lab is titin, one of the three major protein components of muscle tissue. Critical to its mechanical properties is the large molecular size of titin. “It’s the largest known protein in nature,” said Cameron Sargent, a PhD student in the Division of Biological and Biomedical Sciences and a first author on the paper along with Christopher Bowen, a recent PhD graduate of the Department of Energy, Environmental & Chemical Engineering. Muscle fibers have been of interest for a long time, Zhang said. Researchers have been trying to design materials with similar properties to muscles for various applications, such as in soft robotics. “We wondered, ‘Why don’t we just directly make synthetic muscles?’” he said. “But we’re not going to harvest them from animals — we’ll use microbes to do it.” To circumvent some of the issues that typically prevent bacteria from producing large proteins, the research team engineered bacteria to piece together smaller segments of the protein into ultra-high molecular weight polymers around two megadaltons in size — about 50 times the size of an average bacterial protein. They then used a wet-spinning process to convert the proteins into fibers that were around 10 microns in diameter, or a tenth the thickness of human hair.

Aside from fancy clothes or protective armor (again, the fibers are tougher than Kevlar, the material used in bulletproof vests), Sargent pointed out that this material has many potential biomedical applications as well. Because it’s nearly identical to the proteins found in muscle tissue, this synthetic material is presumably biocompatible and could therefore be a great material for sutures, tissue engineering and so on.