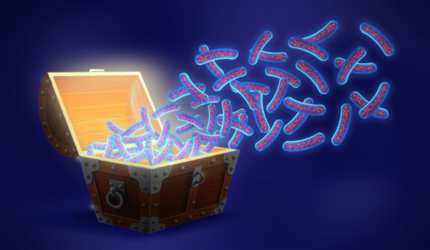 More than 60% of all drugs, including antibiotics and cancer treatments, are derived from natural products in the form of small molecules encoded by metabolic genes. These molecules often form complex chemical structures, shaped by billions of years of evolution across a diverse range of life forms spanning bacteria, plants, and humans. Yet the hundreds of thousands of individual genetic pathways that make these structures possible and thus maintain life remain largely unexplored, in part because of the daunting complexity of variations of genetic and molecular interactions among species.

However, Yale scientists have developed a new synthetic biology technology that acts as a sort of universal translator that can track previously unexplored genes and individual metabolic events in different organisms, they report in the April 1 online issue of the journal Cell.

“You can think of it as a universal genetic language, a sort of Rosetta Stone that can unlock the hidden genes and molecules of life,” said Farren Isaacs, associate professor of molecular, cellular, and developmental biology in Yale’s Faculty of Arts and Sciences and co-senior author of the paper.

One of the new frontiers to explore, he said, is the human microbiome, where trillions of bacteria interact with their host and have profound impact on human health. The genetic interactions between the microbiome and human cells offer great promise in improving the understanding of disease and developing new medical therapies. However, less than 1% of all potential genetic pathways that affect these interactions between species have been explored.

The study of these gene pathways has been hampered by the inability to grow microorganisms outside of their native environments and in laboratory conditions. And the genes encoding these metabolites are often silenced, rendering the discovery of natural products impossible.

In order to study these interactions, the labs of Isaacs and co-senior author Jason Crawford, associate professor of chemistry and microbial pathogenesis and director of the Institute of Biomolecular Design and Discovery, used computational biology and DNA synthesis to create a single “synthetic genetic element,” or SGE. SGE, generated from computer-aided design software developed by the team, re-designs genetic pathways so that they can be activated in a variety of host organisms allowing the researchers to determine their molecular functions.

“We redesigned sequences of genes and their promoters that control their functions across diverse organisms,” said Jaymin Patel, a Yale graduate student in the labs of Crawford and Isaacs and first author of the study.

Using the new tool, the researchers were able to discover how one genetic pathway from the human microbiome encoded a previously unknown class of metabolites that they called tyrocitabines. These metabolites inhibit translational activity and are implicated in dozens of other pathways yet to be discovered, the researchers report.

The two Yale labs are now working to scale up use of this new discovery to eventually explore thousands of previously unknown genetic pathways that may explain the role of these metabolites in nature and yield possible therapeutic benefits.

“This sets the stage for using a completely new synthetic biology discovery engine to identify scores of new natural products,” Isaacs said. “We are ready to crank it up.”

Yale’s Joonseok Oh and Shenqi Wang are coauthors of the study.