Research has added evidence showing that both prenatal and postnatal exposure to air pollution can harm kids. 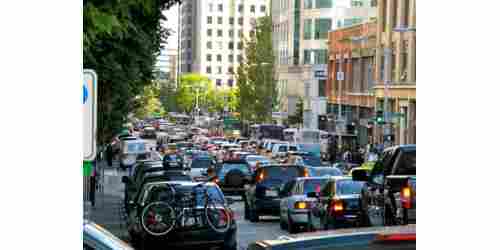 “Even in cities like Seattle or San Francisco, which have a lot of traffic but where the pollution levels are still relatively low, we found that children with higher prenatal NO2 exposure had more behavioral problems,” researchers said.Oran Viriyincy/Flickr

Air pollution is not just a problem for lungs. Increasingly, research suggests air pollution can influence childhood behavioral problems and even IQ. A new study led by the University of Washington has added evidence showing that both prenatal and postnatal exposure to air pollution can harm kids.

The study, published in Environmental Health Perspectives, found that children whose mothers experienced higher nitrogen dioxide (NO2) exposure during pregnancy, particularly in the first and second trimester, were more likely to have behavioral problems.

“Even in cities like Seattle or San Francisco, which have a lot of traffic but where the pollution levels are still relatively low, we found that children with higher prenatal NO2 exposure had more behavioral problems, especially with NO2 exposure in the first and second trimester,” said Yu Ni, lead author and a postdoctoral scholar in the Department of Environmental & Occupational Health Sciences.

The study involved data gathered from 1,967 mothers recruited during pregnancy from six cities: Memphis, Tennessee; Minneapolis; Rochester, N.Y.; San Francisco; and two in Washington, Seattle and Yakima. Originally, these participants were enrolled as part of three separate studies: CANDLE, GAPPS and TIDES. The three studies have been combined under a major NIH initiative called ECHO, which brings together multiple pregnancy cohorts to address key child health concerns. These three combined cohorts are known as the ECHO PATHWAYS consortium.

The study employed a state-of-the-art model of air pollution levels in the United States over time and space that was developed at the University of Washington. Using participant address information, the researchers were able to estimate each mother and child’s exposures during the pregnancy period and early childhood.

Exposure to NO2 and PM2.5 pollution in early life is important to understand, Ni said, because “there are known biological mechanisms that can link a mother’s inhalation of these pollutants to effects on placenta and fetal brain development.”

Furthermore, once the child is born, the first few years are a critical time of ongoing brain development as the number of neural connections explodes and the brain reaches 90% of its future adult size, the researchers write. For young children, inhaled pollutants that invade deep in the lung and enter the central nervous system can cause damage in areas relevant for behavioral and cognitive function.

“This study reinforces the unique vulnerability of children to air pollution — both in fetal life where major organ development and function occurs as well as into childhood when those processes continue. These early life perturbations can have lasting impacts on lifelong brain function. This study underscores the importance of air pollution as a preventable risk factor for healthy child neurodevelopment,” said senior author Dr. Catherine Karr, a professor in the UW School of Public Health and School of Medicine.

More specifically, the researchers found that exposure to PM2.5 pollution was generally associated with more behavioral problems in girls than in boys, and that the adverse effect of PM2.5 exposure in the second trimester on IQ was stronger in boys.

“We hope the evidence from this study will contribute to informed policymaking in the future,” Ni said. “In terms of reducing air pollution, the U.S. has gone a long way under the Clean Air Act, but there are threats to continued improvement in the nation’s air quality. The evidence suggests there is reason to bring the level of air pollution down even further as we better understand the vulnerability of pregnant women and children.”