Scientists develop a new method to measure the extent to which regional geographic features that affect local rates of speciation, extinction and dispersal for species. 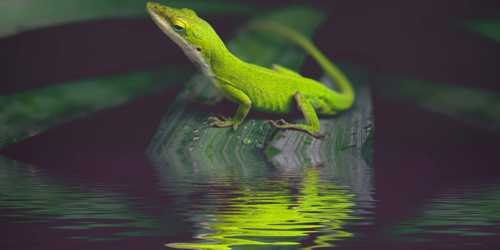 Biologist Michael Landis in Arts & Sciences developed a new method to measure the extent to which regional geographic features — including barriers between regions, like mountains or water — affect local rates of speciation, extinction and dispersal for species. He and his collaborators tested their approach by modeling the movement and diversification of neotropical anole lizards. Here, a green anole lizard is reflected on water. (Photo: Shutterstock)

Biologists have developed a new method to measure the extent to which regional geographic features — including barriers between regions, like mountains or water — affect local rates of speciation, extinction and dispersal for species. As a test case, they successfully used their model to delineate the movement and diversification of neotropical anole lizards. “Geographical features influence evolutionary outcomes in predictable ways,” said Michael Landis, assistant professor of biology in Arts & Sciences at Washington University in St. Louis, first author of the study published in the Proceedings of the National Academy of Sciences (PNAS). “Our study lays the statistical groundwork to model how different geographical features might act as barriers to species movement or might accelerate extinction for other groups besides anoles.

“Such inferences can also help us predict which species are most likely to move, evolve or go extinct as climate change intensifies,” he said.

Scientists have long recognized that geography plays a role in how species colonize new regions and whether widespread species eventually separate out into groups that become genetically distinct, losing the ability to reproduce with each other.

But even though geography plays a clear, describable role in the fate of many individual animal and plant species, no one has previously developed standardized models that allow geographical features to shape how evolutionary radiations unfold in space. To address this gap, Landis and his collaborators designed a new phylogenetic model of biogeography that they named FIG.

“FIG allows speciation, extinction and dispersal rates to depend on the local regional features that each species encounters in its range as it evolves,” Landis said. “For example, the presence of a barrier interrupting a species range may cause that species to ‘split’ into two different species faster than if no barrier existed.

To demonstrate its capabilities, Landis and his collaborators used their approach to model the biogeography of Anolis lizards, a group of lizards known to have spread throughout the Caribbean islands and North and South America.

The qualitative part of what they learned was not surprising: that anoles tend to move over short distances rather than far distances, and that movements over water were less common than movements over land for equivalent distances.

“In other words, far places are far and water is wet — which told us that our new model was in the right ballpark,” Landis quipped. But with persistence, he soon proved that the model can quantify relationships between certain geographical features and evolutionary rates that were previously difficult to measure.

“For example, we were able to measure a maximum distance at which species ranges become too widespread to resist splitting in two,” Landis said. “To our surprise and satisfaction, our estimated distances aligned nicely with where widespread anoles are found today: some continental anoles are widespread among adjacent regions, but water restricts the ranges of most insular anoles to just one region.”

The scientists discovered that distance impedes the movement of Anolis lizards, both in terms of range expansion through dispersal and in terms of allowing widespread species with fragmented ranges to ‘split’ into two species.

Landis and his collaborators have made their new model freely available to others. They anticipate that other biologists will customize and apply FIG to test new hypotheses concerning how other groups of animal and plant species were shaped by the mountains and oceans that they encountered.

“Biogeographers recognize that greater distances and geographical barriers both limit movement,” Landis said. “But it is harder to get biogeographers to agree on the extent to which distances or barriers should influence how species spread over millions of years.

“We biologists haven’t had the right statistical tools to model how geographical features might influence speciation, extinction and dispersal rates among closely related evolutionary lineages, so we invented some,” he said. “The key ideas that emerged in this study arose from a close collaboration among organismal and mathematical biologists who are fascinated by how species evolve in space.”