The researchers set out to investigate how the tiny fly combines the two sets of brain-to-muscle instructions. 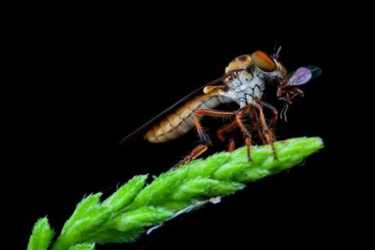 The Gnat Ogre (Holcocephala fusca) is a predatory robber fly that grabs other insects out of the air, catching them with extreme precision. This particular fly holds a small rove beetle as prey on its proboscis. Credit: S T Fabian.

For those of us who occasionally trip over a curb or bump into a door frame, it’s hard to imagine an organism with a brain smaller than the period at the end of this sentence deftly maneuvering around obstacles while chasing fast-moving prey on the wing. A new study in the Journal of Experimental Biology by researchers from the University of Minnesota and the Imperial College London shows how a tiny fly can do just that — offering a valuable source of insights for efforts to design robots, drones and more.

The research, carried out by Paloma Gonzalez-Bellido, Mary Sumner, and Trevor Wardill of the University of Minnesota’s College of Biological Sciences, and Sam Fabian of the Imperial College London Department of Bioengineering, focuses on the aerial feats of a miniature robber fly known as a gnat ogre — adults are tiny, just 7 mm in length on average. Native to North and South America, the gnat ogre is known for its ability to pursue and capture other insects in flight with extreme precision. It’s remarkable enough that this insect’s tiny brain can steer it to catch an object on the move. Even more remarkable is that it can avoid running into obstacles at the same time. The researchers set out to investigate how the tiny fly combines the two sets of brain-to-muscle instructions.

“Predatory lifestyles put a premium on neural performance to move quickly and precisely, and this pressure is exacerbated in miniature animals, because they have fewer neurons,” said Gonzalez-Bellido, who leads the Fly Systems Laboratory (FLYSY) at the University of Minnesota. “Still, Gnat ogres intercept their prey — similar to catching an over-the-shoulder pass in football — so we wanted to know how flexible their strategy is, and if these flies could cope with additional challenges during the interception, such as obstacles on their path.”

With the help of plastic bait, fishing wire, and high-speed video, they pursued an answer by observing gnat ogres as they pursued a moving target. Comparing video recordings of the fly chasing the bait in the presence of obstacles with flight trajectories predicted by models of obstacle-eluding flight and moving-object-pursuing flight, the researchers found that gnat ogres continuously adjusted their path based on the mix of the two types of visual stimuli. If the obstacle was large enough to obscure the prey for more than 70 milliseconds, the insect was likely to abandon the chase. But if the line of sight was barely interrupted, the chase continued after the fly cleared the obstacle.

“We discovered that simple visual feedback alone — reacting to things rather than predicting ahead — can be used to quickly solve complex navigation challenges,” says Fabian, who completed his Ph.D. in the FLYSY Lab. “This work shows that even creatures with comparatively tiny brains are quite capable of performing extreme and precise behavior at speeds we can barely see, let alone appreciate.”

The researchers attribute the fly’s ability to adjust its trajectory so rapidly to its small size, which allows signals to travel rapidly from eye to brain to flight muscles. Future research will include testing what information small animals can gain about their target before they take off and how they know what to attack. The findings may have implications for other fields exploring nature-inspired innovation, too.

“Current robotics technology tends to use extra, expensive sensors to conduct tasks like obstacle avoidance (e.g. LIDAR or RADAR). However, animals, like our robber flies, manage to conduct multiple tasks simultaneously using information only from their visual system (i.e. tracking the motion of a distant target and processing the position and expansion of potential obstacles), and on a tiny energy budget,” says Fabian. “Getting a clearer understanding of how they combine this sensory information to generate accurate and rapid behavioral responses to complex navigational challenges could help inspire future innovation in the robotic sensing capabilities.”

Source: Based on University of Minnesota news release.